Serenity Luedke describes her daughter, Taylor, as kind, smart, and quiet, but perhaps what impresses her most about her daughter is her strength.

“Taylor is probably the strongest person you will ever meet. She does not let much slow her down.” 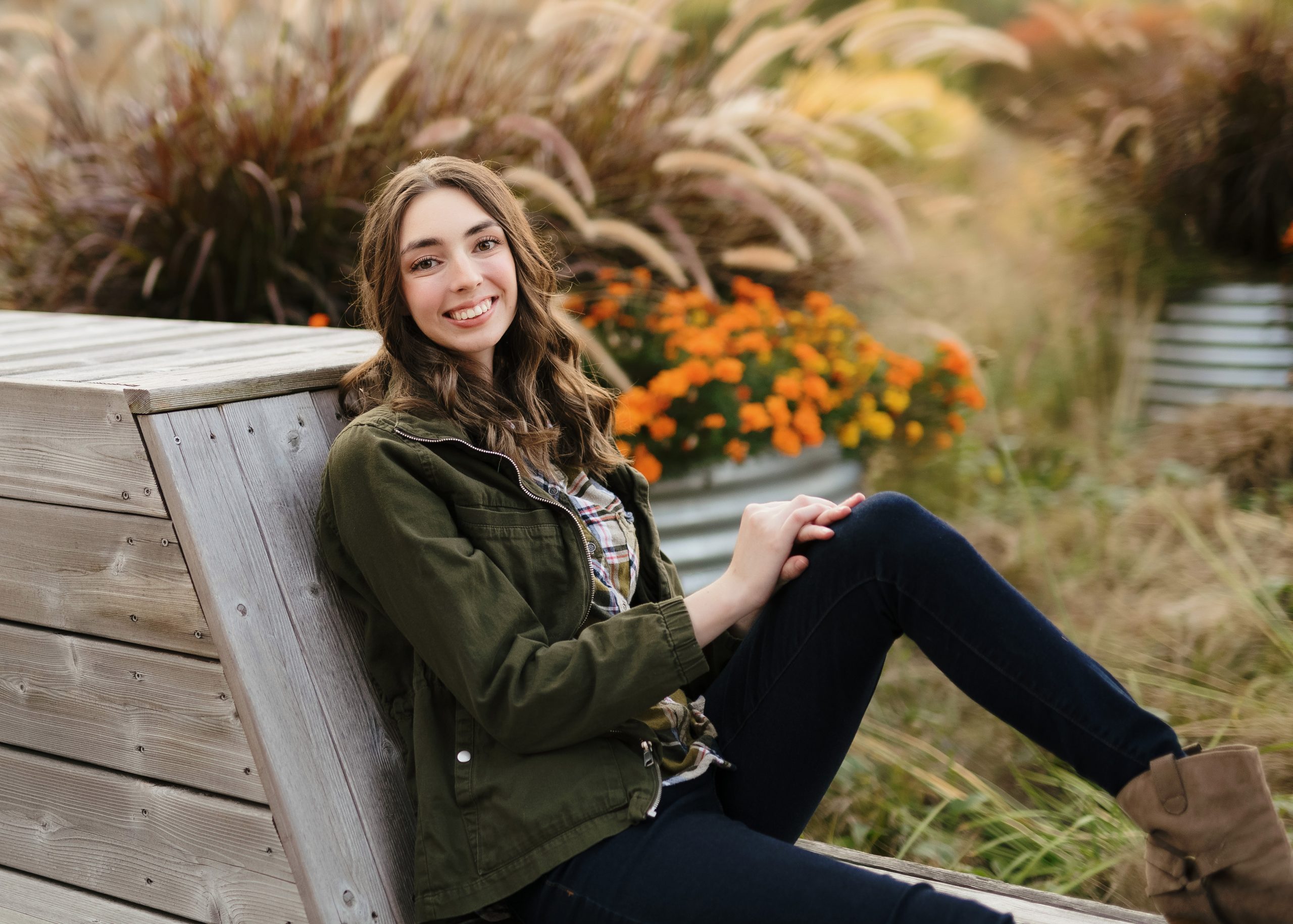 As Serenity says this, Taylor is seated next to her, a powered wheelchair parked next to the bed on which they sit. Taylor has used the chair almost exclusively for the last 18 months while her various illnesses have robbed her body of the physical strength required to walk.

For the past seven years, Taylor has dealt with pains, fatigue, countless surgeries, and even intestinal failure, but she never stops working, never stops pushing herself to feel better, to get better.

And when it comes to work ethic, that apple fell very close to the tree, as Serenity has spent the past seven years looking for answers, traveling all over the country so her daughter could find relief, all while needing some relief herself. As it turned out, that relief was found just 55 miles to the northeast, in Omaha, Nebraska.

When she was 12 years old, Taylor first started to feel tired. She told her mom, but Taylor was a competitive swimmer at her Lincoln, Nebraska-area middle school, and at that age, Serenity didn’t think much of it. A few weeks later, Taylor came home from practice saying her legs felt funny. The next day, walking was a bit more difficult. The day after that, she felt a strange pain in her upper legs, all the way up toward her arms.

Serenity took Taylor to the doctor, who immediately had her sent to Children’s Hospital in Omaha, where she was diagnosed with Guillan-Barre syndrome, a disorder in which the body’s immune system attacks the nervous system, often leading to ascending paralysis, and can be fatal in extreme cases.

Thankfully, the doctors were able to treat Taylor, and after 10 months of rehab, she had mostly recovered. The one symptom that persisted was significant stomach pain. As the pain intensified, doctors began various tests, but nothing seemed abnormal. Eventually, they discovered multiple compressions around the arteries carrying blood to many of Taylor’s organs. This was caused by a condition known as Ehlers-Danlos syndrome (EDS), which can have far-reaching effects within a patient’s body, from the skin, to joints, to arteries.

One of the compressions caused by EDS is known as Nutcracker, which forced Taylor’s otherwise healthy kidney to not function properly. She was referred to a hospital in Wisconsin, where a surgeon successfully moved the kidney from behind her stomach to her lower abdominal area and reconnected it. The surgery took 15 hours, as Taylor’s blood vessels are difficult to work with for most surgeries, and the surgeon had to make sure it all went perfectly. 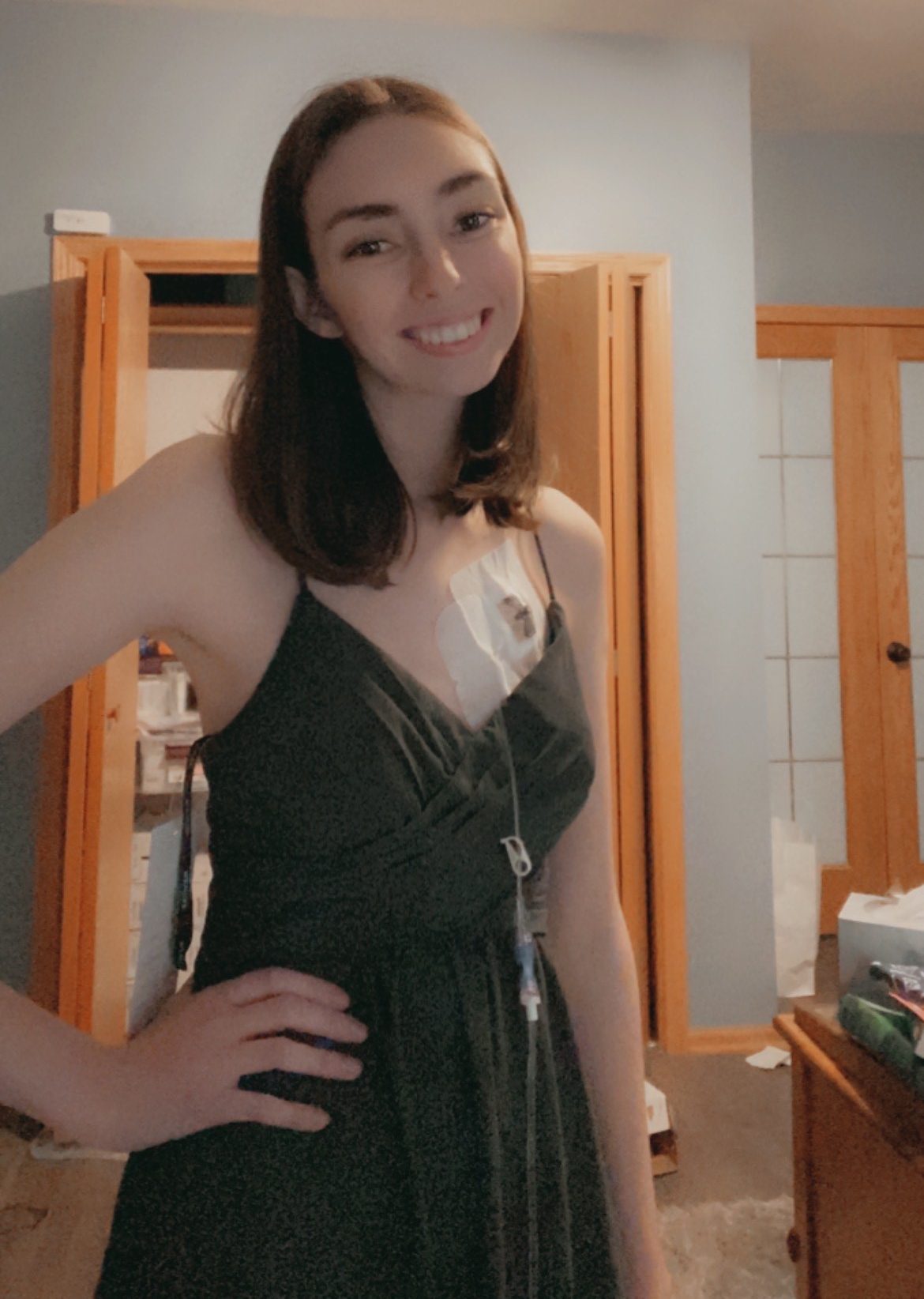 Thankfully, it did, and while that procedure alleviated some symptoms, Taylor continued to deal with pain and discomfort. Then, in early 2020, she contracted COVID, which caused even more issues, particularly with her digestive system. Over the next 18 months, Taylor dealt with increasing pain. She had to bow out of swimming and bowling, two activities she loved. She began using a wheelchair full-time.

Making matters worse was the fact that Serenity knew about the intestinal rehabilitation program at Nebraska Medicine in Omaha, but due to the pandemic, getting into that program with Dr. David Mercer proved to be difficult.

By the time September 2021 rolled around, Taylor’s condition had worsened significantly. Serenity was able to schedule a consultation with Dr. Mercer, but there were certainly no guarantees.

“Taylor looked gray, like she was not going to survive,” Serenity says. She notes that with Taylor’s chart, Dr. Mercer could have simply seen how many things had already been tried and assumed there was nothing he could do. But when the family showed up to that consult, they discovered that Dr. Mercer had gone through everything in Taylor’s chart, leaving no page unturned.

Initial consultations like that typically last an hour or so, but Taylor’s lasted three hours. Dr. Mercer asked questions and listened carefully. He explained things thoroughly and clearly. He was honest and direct, but kind and disarming. Serenity says, “[Dr. Mercer] will always have a special place in my heart.”

As Serenity recalls, Dr. Mercer went into that consultation not actually knowing if there was anything he could do for Taylor. But after talking, and after seeing Taylor’s condition, he knew he had to try.

Another surgery was proposed, and while the thought of a fifth or sixth surgery in six months gave Serenity pause, a different feeling began to creep in and take hold: hope. For the first time in a long time, Serenity thought, ‘maybe this is going to be something that works.’

The surgery would hopefully relieve the compression around her digestive system, and it was initially scheduled for December. In early October, however, Taylor fell ill. She was transferred to Nebraska Medicine from Bryan Hospital in Lincoln, and Dr. Mercer performed the procedure. While Taylor recovered, the hospital social workers contacted Ronald McDonald House and informed Serenity she had a place to stay.

Throughout Taylor’s journey, they have become quite familiar with Ronald McDonald Houses. In fact, they’ve stayed at four different Houses across the country, in Wisconsin, North Carolina, Kansas City, and Omaha. And while the specific Houses are unique, the support Serenity and Taylor have received in those Houses has been consistent and unwavering.

Serenity says, “I don’t know where we would be if we didn’t have the Ronald McDonald House.”

Taylor, equal parts earnest and sarcastic in a way only a teenager can be, replies, “We’d be broke.”

On top of the financial impact of not needing to pay for a hotel room for weeks or months at a time, Serenity appreciates how the House provides so many things that have made their stays easier.

“They feed you, they house you, you can do laundry. They have a shuttle that takes you back and forth to the hospital. The Ronald McDonald House has been amazing for us,” she says. 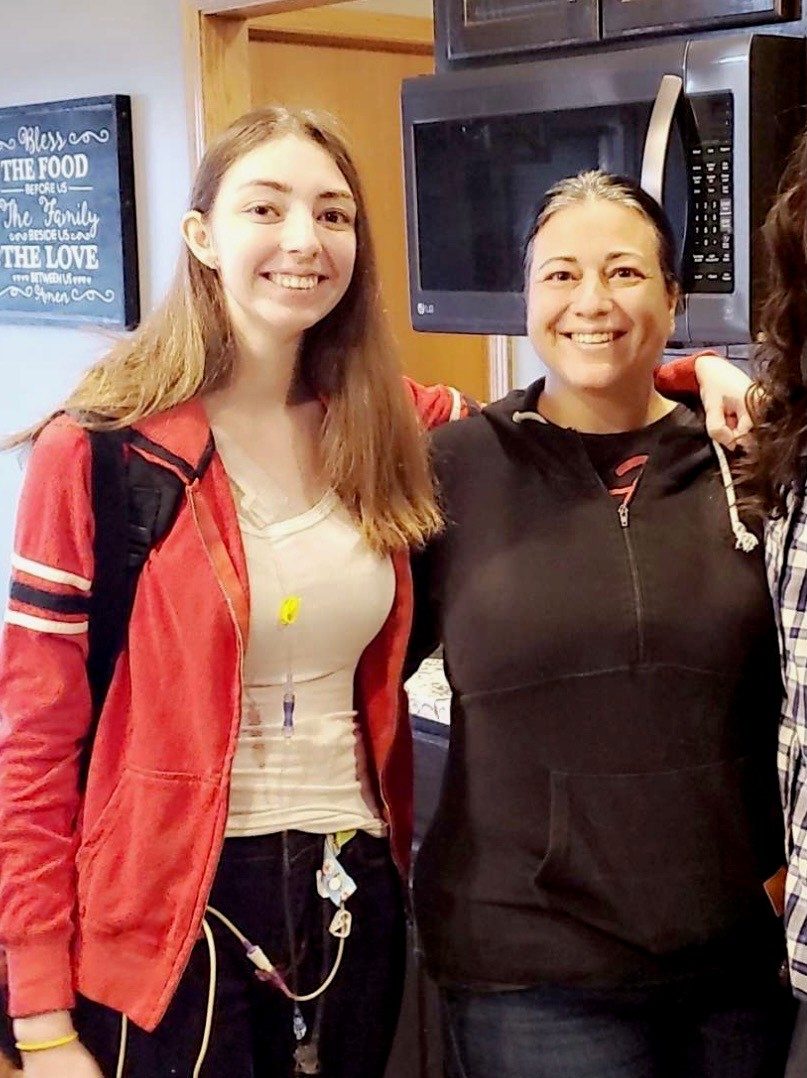 Knowing she had a comfortable room, food to eat, simply a place to relax after a long day in a hospital room, it all gave Serenity the peace of mind she needed. That knowledge also provided peace of mind to Taylor, who was inpatient at the time and not staying in the House, but she could see how much of a toll these trips and procedures were taking on her mother, saying, “I liked knowing she had a place to shower, and that she would actually eat. Prior to the Ronald McDonald House, she would eat like once a day.”

Being a caregiver can be exhausting, constantly consumed with fears and questions, while juggling appointment schedules and medication regimens, learning medical terms and procedures, dealing with insurance, and a thousand other things that can occupy a caregiver’s time and bandwidth. Forgetting to eat is just one way illness impacts more than the patient themselves.

And here was a 19-year-old patient, recovering from yet another surgery, after years of battling chronic illness with more twists and turns than, well, her intestines, and she was worried about her mom’s wellbeing, adding, “I’m very thankful for the Ronald McDonald House. She eats better, she gets pretty good sleep. It’s so helpful.”

And while those interactions have been different during the pandemic, Serenity enjoys every opportunity to connect with other parents facing challenging circumstances, similar to hers or not: “It was nice to have other people who completely understood.”

Serenity also appreciates having a staff full of caring individuals who are always there to help.

Everybody there was kind, and went above and beyond, asking ‘what can we help you with?’ The underlying thing was, ‘what can we do to make this time easier for you and your family while you’re going through this?’

In the year that’s followed that initial visit, Taylor continues treatments to manage her care, and even though this is a journey measured in years instead of weeks, she has found a path forward, a path to some normalcy. Through all of this, Taylor’s maintained her strength, her ambition, her kindness.

She hangs out with her friends regularly, makes crafts and TikTok videos – many of which revolve around informing others about her condition and chronic illness in general – and she recently got an accessible van that, once equipped with the modifications she needs, will give her more of the independence she wants. She’s taking college classes with an eye on getting into either nursing or child life, where she can help young people going through some of the things she’s faced. Now, she has goals beyond simply feeling better.

And just like her mother and her doctor, Taylor won’t stop working until those goals are achieved. 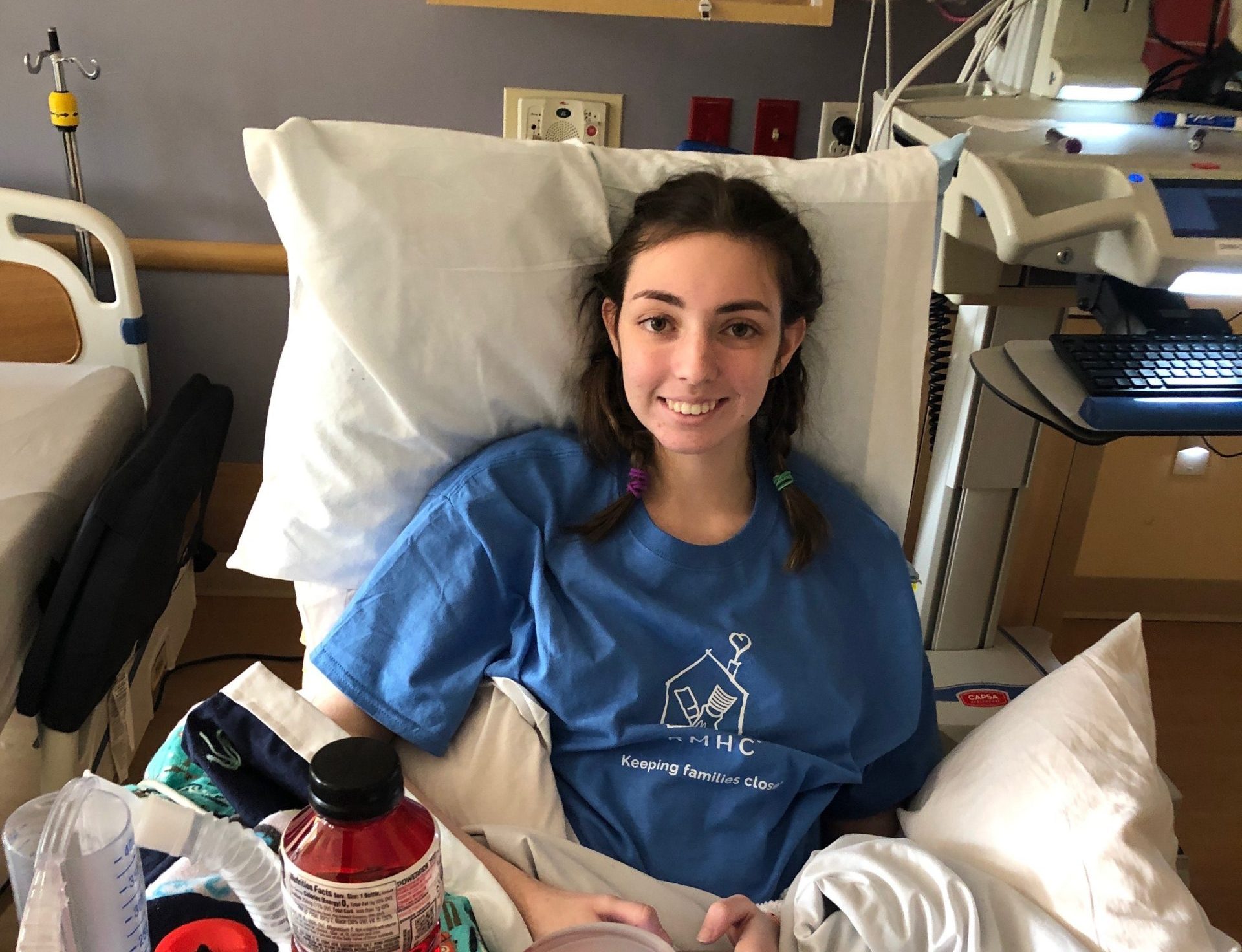