The following was written by Patrick’s mother, Emily, and edited by RMHC in Omaha staff.

“We adopted Patrick when he was just a few days old, in November 2008. He’d had a kind of rare complication to a birth defect called gastroschisis, and was born without any small intestine. He could only get nutrition by IV. Doctors told us early that his only hope of long-term health and survival would be an intestinal transplant. They suggested several centers we could take him to for evaluation, but everything was back east, and we lived in Utah, so we took him home.

For the next several years, Patrick essentially thrived, or at least as much as he could given his serious health issues and 100% dependence on IV nutrition called TPN (Total Parenetal Nutrition). He didn’t tolerate normal food, despite a team of doctors who did everything right to help his prognosis.

We brought him home and listed him for transplant at a smaller – though still out-of-state – transplant center. From then on, we traveled for medical care every few months. We got really used to airports and hotel rooms and crashing with friends. Also, through multiple hospital admissions near home and away, we got super good at living in a children’s hospital for weeks at a time. When you’re a parent to a child who is fighting to live, you learn to do things like that.

In the in-between times, Patrick was growing and enjoying kid stuff like school. But the medical moments were increasingly scary and difficult the older he got. And although his team was doing wonderfully at helping him grow and be as healthy as he could ‘given his condition,’ it was becoming obvious that without a transplant they were eventually going to run out of miraculous saves.

So when Patrick was 4, we sought a second opinion at Nebraska Medicine. His veins were scarring and they offered solutions we couldn’t find anywhere else. We transferred his transplant listing and continued to wait.

A few months later we stayed at the Ronald McDonald House in Omaha for the first time. Patrick’s IV had clotted and our team at home hadn’t been able to start a new one. The situation was now life and death. We scheduled emergency surgery in Nebraska and booked a flight for the next day.

We were used to tiptoeing around hospitals and living on fast food in situations like this. Once I survived on a box of donuts and a to-go container of clam chowder for an entire weekend when a medical emergency landed us in a hospital out of state. Another time we were woken by a warning call from a hotel manager at the crack of dawn because a guest in the neighboring room complained about the sound of my son playing. We had to get very creative to stay out of the room except to sleep for the rest of that week.

The Ronald McDonald House was such a contrast for us! Warm bed. Warm foods. And warm and welcoming people. I’ll always remember that our first meal there the dinner group had brought in an assortment of casseroles. I can’t put into words what that comfort food meant when we were so far from home and so afraid. And instead of going stir crazy quietly in a hotel room, we had dinner with other families like ours, played in the backyard, and then explored the toys in the playroom downstairs. Patrick’s surgery was successful and we returned home after a short recovery.

It was over a year before we returned to the Ronald McDonald House again. After years of waiting, Patrick received a liver-intestine-pancreas transplant on his 6th birthday, Halloween. We were given a room a short time later that became an oasis for us during his recovery. At first, my husband and I would trade off turns sleeping in a “real bed” and bringing back leftovers from the night before to eat at the hospital. Eventually my husband had to go home to work and Patrick was able to move into the house with me.

We were there from Halloween to Valentine’s Day. With my husband gone half the time, the people in the house became our family. We cooked together. Cleaned together. Played together. Cried together. Every morning, Patrick and I would come downstairs for breakfast and while I mixed his formula, he helped the staff to mop the kitchen. If he wandered off, I’d find him in Tina’s office trying on her glasses. 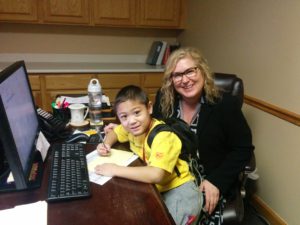 Patrick was immune suppressed so there weren’t a lot of places we could go. The dining room became his school. He learned to read by practicing reading to the volunteers in the office. He practiced writing with the other kids in the house. Another room became our church where I’d teach him Sunday School.

That Christmas in the house is one of my favorite memories. I fondly recall holiday crafts, gingerbread houses, and making batches and batches of homemade frosting for sugar cookies. We even ordered piano music online and had a Christmas sing-along using the old piano in the family room. In January, the snow looked too perfect so we built snowmen and made sleds from a box.

Dinners were really special as they brought the house together, both the residents like us who’d stayed a while, or those just passing through. We stayed for hours after the meal was done. On the rare days when there wasn’t a meal planned, we’d combine our own groceries with the stock in the pantry and make delicious meals together. Patrick learned to eat there. Some of his favorite foods are things that were brought in by meal groups or left in the pantry.

Really, as residents, we kind of just raised our kids together. We all celebrated their successes and mourned their setbacks. We are still in touch with the other families who were there with us.

I can’t say enough good things about our time at the Ronald McDonald House. From the staff, to the residents, to the volunteers who brought in meals, donated gifts or just came by to visit. (Patrick loved to help give tours.) We met so many wonderful people. It was one of the hardest times in our lives. But whenever it got to be too much and I just didn’t know how to get through that day, someone was there. Someone who’d listen. Or finish my laundry. Or fix me a meal. Or play with Patrick. Or give me a hug. It was those people who turned what was the hardest thing we have ever been through into one of our happiest memories.

The Ronald McDonald House was more than just a roof over our heads. It became our home away from home.”

You can be a part of stories like Patrick’s. Donate now. 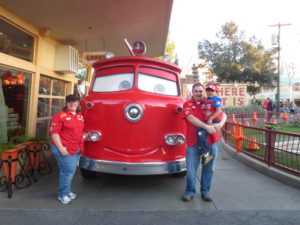