No Longer Alone, In a Home Away from Home

In many ways, Rae and Brandon are a typical Midwestern couple. They live in a small town near Kearney, Nebraska, with their daughters, six-year-old Charliegh, and three-year-old twins Alexis and Blakely. They have fun together as a family, they lounge in front of the television on weekends, and they would do anything to care for their children.

“We look at the girls and see how happy they are, so we know we’re doing something right.” – Rae

Rae’s first pregnancy went as any typical pregnancy might – healthy mother, healthy baby. The second pregnancy, however, went a bit differently. Doctors prescribed partial bedrest early on, which forced Rae to leave her job and stop going to school. She dealt with significant nausea throughout the pregnancy, and had to be hospitalized multiple times due to dehydration. At 28 weeks, Rae had to be placed on full bedrest, which would be difficult for anyone, let alone a parent with a toddler.

A few weeks later, doctors discovered fluid in one girl’s chest cavity over her heart and lungs. Rae needed more specialized care, so she was sent to Omaha that same night. 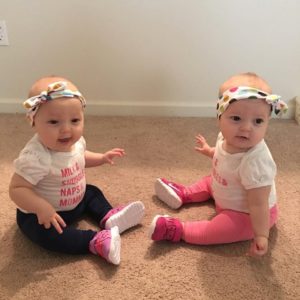 Shortly after arriving, Rae went into labor. While the doctors would have preferred to delay the birth longer, all of the stress on the babies was beginning to take its toll. Rae would need to deliver right away, at 34 weeks.

Alexis was born first, but there was a problem. She wasn’t breathing. Rae didn’t get a chance to see her newborn before a team of nurses and doctors pulled the baby away to revive her. Surrounded by dozens of people, Rae felt traumatized, and she still had to deliver the second baby. Soon after, Blakely was born with a complication of her own, due to a condition common in identical twins.

One child unable to breathe. Another severely jaundiced. Rae and Brandon were terrified.

Alexis was intubated, and slowly gained her ability to breathe. Blakely’s body fought back, getting rid of the bilirubin that threatened her health. In time, the girls began to grow and develop. It wasn’t easy, but after about a month in the NICU, the twins were healthy enough to go home with their parents. Unfortunately, their ailments were far from over. The girls cried as though they were in constant pain. They experienced seizures and dealt with respiratory issues.

In the years that have followed, Alexis and Blakely have been shuffled between their home hospital and Omaha, diagnosed with myriad conditions, and undergone a variety of surgeries. Prior to 2019, the family used some alternate lodging options during their trips to Omaha, including a hotel stay while construction for the Hope and Healing Expansion was underway in the summer of 2018.

The family thought they’d only be in the hotel for a short time before going home. The stay lasted three months.

Rae says, “It was unexpected, financially, so we were racking up medical bills. I wasn’t able to work. It was a huge financial burden.” Beyond that, she says she often felt incredibly lonely while at the hotel, caring for her sick children. Even when the entire family was together, coping was difficult, and a family of five in a single hotel room brings its own set of challenges, as anyone who’s ever stayed in a hotel room with their family can attest. 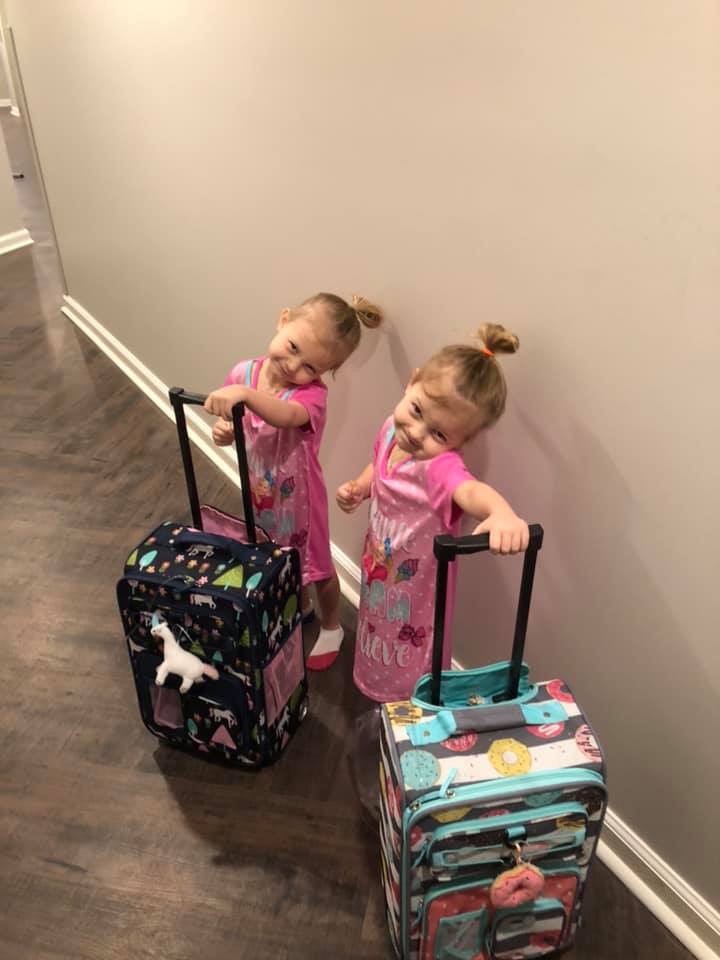 Making matters worse, it seemed as if every other week, one or both of the girls would find themselves admitted to the hospital for one illness or another. While the twins share some allergies and conditions, they still face unique issues related to infections, surgeries, and the like. Rae says a treatment plan or specific diet may begin to work for the girls, only to see them deal with an allergic reaction to that same diet or medication weeks later.

Among their many diagnoses include intestinal dysmotility, intestinal failure, FPIES, CIPO, anemia, and short bowel syndrome. If the terms seem unfamiliar, you’re not alone. The only groups of people typically well-versed in phrases like those are medical staff and families like the twins’.

When procedures go wrong, or treatment plans don’t work out, or any host of problems appear, the effect on Rae and Brandon can be devastating.

“We get a sense of hopelessness.”

The entire family has dealt with so much in the twins’ three-plus years of life, and yet, they always will themselves forward, grasping on to any shred of hope and positivity they can find. “The girls are really strong and we just look at them, and we think if Lexi and Blakely can do this, then we can get through it, too,” Rae notes.

In addition to their own family, Rae and Brandon have found strength in a group of people from various backgrounds, from all across the country, staying in a House that’s unlike any other.

In February 2019, Alexis and Blakely needed to come to Omaha for surgery. A social worker at their hospital informed them that a room was available at the Ronald McDonald House. Rae says her family knew they’d be walking into a comfortable room, but the rest of their experience was a very pleasant surprise.

“I expected it to be a place to stay. It’s been so much more.”

She was surrounded by other parents facing similar circumstances who could offer advice. She had volunteers who prepared meals nearly every night. And she had House staff members who were always willing to listen, to celebrate the good times, and to offer a shoulder on which to cry.

“It was really nice to have the support of the staff. We also met a lot of great families with kids with some of the same issues, so you don’t feel so alone.” 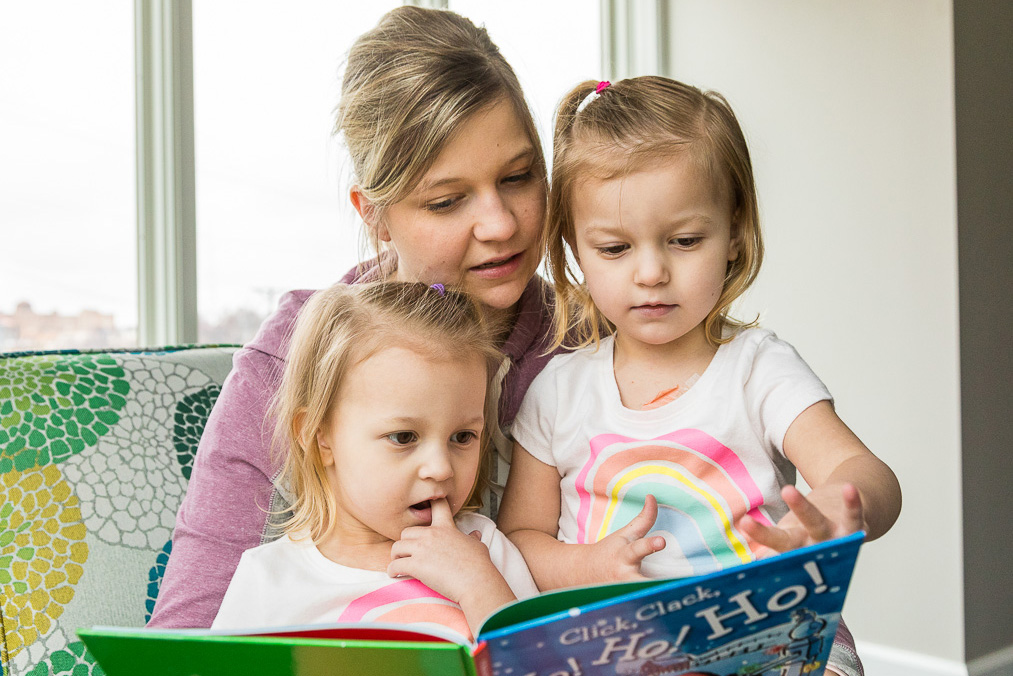 Staying in the House has brought feelings of comfort and stability to Rae’s life, feelings that have been few and far between as her family traverses the twins’ medical issues. While she notes being in Omaha isn’t the same as being home, Rae says the House is truly “a home away from home.” In fact, the girls have become so comfortable here that when they are in town for appointments, “they walk in the House like they own the place,” Rae says with a laugh. On a recent Saturday afternoon, Rae and the twins parked themselves on a couch in one of the family rooms, turned on the television, and had a lazy Saturday, just like they would back home.

This House has become a part of their new normal. “Before the House, we didn’t know what our normal was. It helped a lot seeing other families going through that,” Rae says. Lately, that normal has included monthly trips to Omaha – some being scheduled, others, more serious, impromptu hospitalizations – but regardless of what brings the family here, Rae knows they have a comfortable space to come to, filled with a community of people able to support them in any way possible.

That community becomes even more important as the holiday season approaches. Rae says their family has spent many birthdays and holidays away from home, and each time, it’s a struggle. She adds that being in the House can have a really big impact during the holidays. “It helps a lot being around people – everyone’s going through that.” That shared experience may not replace a typical holiday at home, but it can ease the stress for a family during a particularly stressful time of year. Being in the House, surrounded by a new-found family and support system, can bring some normalcy to the holidays, even when things feel like anything but normal.

Rae says that support has been a critical part of their journey, providing a much-needed boost when everything seems to be going against them. “Being [in the House] this last year, I don’t think, mentally or physically, I could have gotten through all of that without everybody there.” The year before had tested her family in ways they never foresaw, and they didn’t have anyone else facing what they were facing.

“Being [in the House] this last year, I don’t think, mentally or physically, I could have gotten through all of that without everybody there.”

To make sure Rae’s family, and many more like them, are cared for during this holiday season, make a personal gift here. 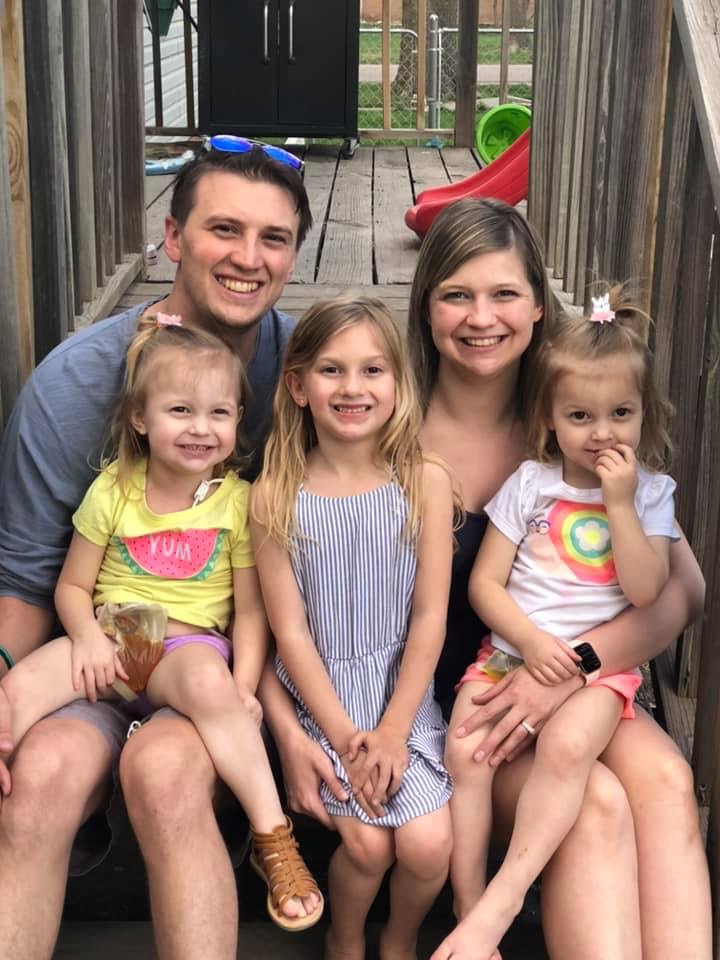