The average American has roughly a 40 percent chance of developing some form of cancer during the course of their life, according to research by the American Cancer Society.

Emily and Elizabeth Webster, of Grand Island, Nebraska, both had odds closer to 100 percent.

Between the two of them, they’ve been diagnosed with cancer six times.

Twelve-year-old Elizabeth, like her mother, Emily, has Li-Fraumeni syndrome (LFS). This genetic disorder is only found in one of every 5,000 to 20,000 people worldwide, and essentially, it prevents the person’s body from fighting off the formation of various types of cancer.

Last summer, Elizabeth thought she was scheduled for her regular scan in July. However, there was a mix-up on the hospital’s side, and rather than reschedule as soon as possible, Emily thought it best to schedule the scan for September, when she would go in for a scan of her own. That way, they could avoid an extra four-and-a-half hour round-trip to Omaha and back.

As it turned out, that mix-up – an honest mistake – may have saved Elizabeth’s life. 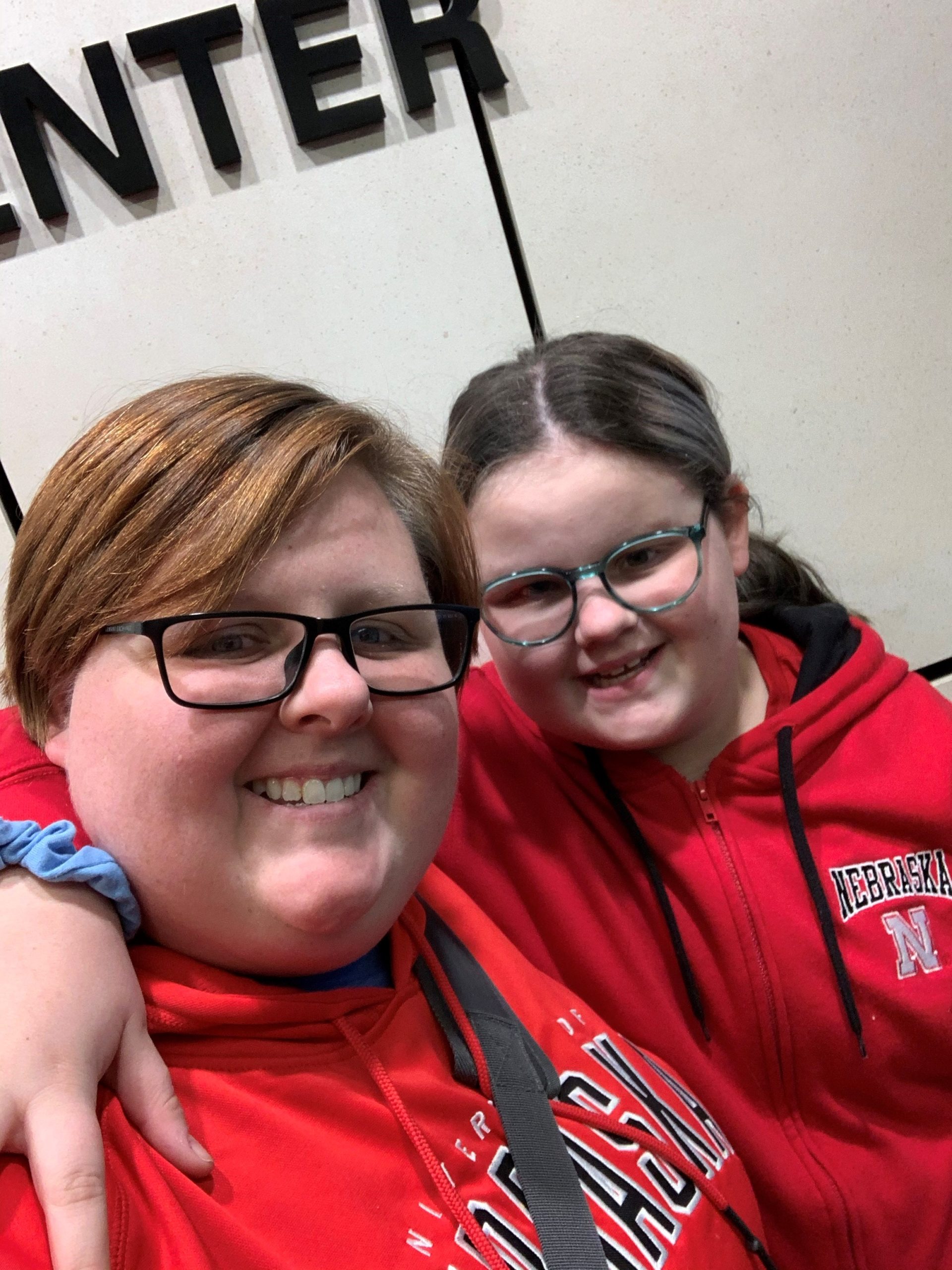 That MRI in September revealed very small spots on Elizabeth’s cerebellum, spots small enough that they may not have been visible two months earlier. The cerebellum is very involved in one’s balance, and according to Emily, her daughter isn’t the most coordinated person already: “She’s kind of a klutz.” It’s entirely possible that those spots and their symptoms would have gone unnoticed for another ten months.

Still, those spots were malignant. The cancer was back. When Elizabeth heard that diagnosis, she said, “My heart just stopped.”

Her mind recalled the five other times she heard those words from a doctor, four times as a patient herself, and one previous time as a mother: it’s cancer. She thought back to Elizabeth’s first bout with cancer, as a three-year-old, when she endured six grueling months of chemotherapy and radiation to fight off an aggressive brain cancer called rhabdomyosarcoma. Emily remembered watching her only child endure so many days of nausea and pain all in an effort to survive to her fourth birthday.

A question sprang to the forefront of her mind: “Is it ever going to stop?”

After taking some time to process the test results, the family considered what they were facing. If there was a silver lining to this diagnosis, it’s that this tumor – known as a medulloblastoma – was not as aggressive as Elizabeth’s first cancer. And while knowing how difficult treatment might be was gut-wrenching, there was also some comfort from their previous experiences. No one aspires to be a veteran when it comes to receiving cancer treatment, but Emily says, “It’s not as scary when you know what’s coming.”

Of course, with months of treatment approaching, the family knew they’d need a place in Omaha to stay. Thankfully, they were welcomed with open arms into the Ronald McDonald House, where Emily said, “It was amazing. It kind of felt like we were at home.” She notes that during treatment, having a home-like environment is crucial.

“The home is very important because when you’re fighting like this, you need to feel comfortable.”

Beyond the comfort, the House also provided activities for Elizabeth and Emily to do in between appointments. As a parent, Emily found those activities critical to her ability to cope with their circumstances.

“When you’re dealing with a bad, bad situation, it’s always good to have someone else come and say, ‘hey, let’s go do this, it will be fun.’ At first you think, ‘What’s fun about being here? My child is sick, they’re having all these tests and surgeries. What is fun?’ So you go out and do the Completely KIDS stuff and things like that and it was fun. You got to act like you were with a group of girlfriends, doing whatever. They gave us a little bit of fun back to us. Every parent needs that.”

She adds that simply having one hour where she can focus on something other than Elizabeth’s condition, while surrounded by other parents dealing with similar situations has been incredibly beneficial.

“Just one hour of fun. One hour of laughing and giggling, and learning about their life and their past, and giving them hope, and them saying, ‘It’ll be okay.’ Absolutely no one knows if it’s going to be okay or not, but just to hear them say that is amazing.”

Even when there were no activities, Emily enjoyed being able to gather together after hard days. “It was nice to just sit in the living room and watch TV with other adults and talk about the crappy day we had.”

During those times, she could ask questions and provide advice to other parents, and together, they would feel better about their families’ futures.

“We have a little village down there to help raise our kids. Everybody needs a village, and we found ours down there.” 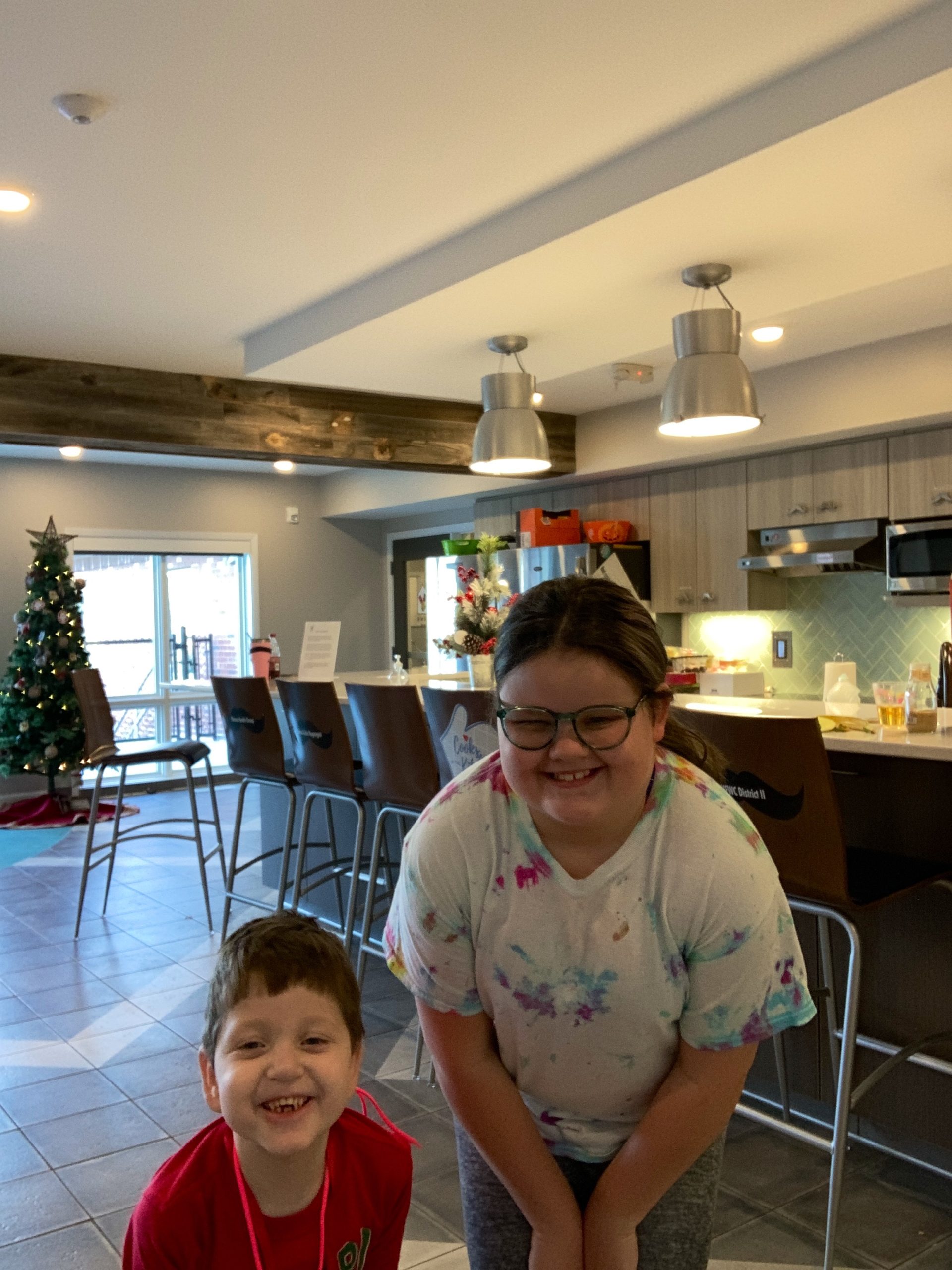 Included in that “village” are the volunteers who provide meals for the families nearly every night. Emily says not having to worry about dinner after a long day was possibly the biggest help to her as a parent. The fully stocked pantry and 24/7 laundry rooms didn’t hurt, either, as she notes, “Having that House was so convenient for us. I didn’t have to stress. Especially if she wasn’t feeling good, I didn’t have to go out and get groceries. I didn’t have to get laundry soap, because it’s all right there. It made it so much easier.”

Being around other children, even those with other diagnoses, has been a joy for Elizabeth, too. One boy, who is a few years younger than Elizabeth, would often visit to see if she could come out and play. Emily would hear a knock at the door, and there was a smiling young child, asking: “Is Elizabeth home?” Elizabeth would walk out of the room, and away they’d go, off on another adventure.

Elizabeth also had an opportunity to be visited by some of her friends from Grand Island around Christmas last year. Elizabeth really loved that they came to see her as she underwent radiation. Her friends also learned more about what Elizabeth is going through, and Emily knows first-hand how important it is to have others in your corner when you’re facing these diseases.

“It’s always nice to know that you’re not the only one in this world. You always think, ‘oh, we’re going to go through it by ourselves,’ but you’re never by yourself.”

That’s especially true for Elizabeth, as she can lean on her mom’s experience with this condition, though the fact that Elizabeth is essentially following in Emily’s medical footsteps is a bit of a double-edged sword. Emily says, “It’s a blessing and a burden all in one. It’s a burden that we have to deal with this until the day we die. It’s a blessing because we’ve already been through it. We know what to expect.”

Elizabeth’s first and second cancer diagnoses occurred nine years apart, just like her mother’s. Emily adds that while they may share LFS, the types of cancer they develop can – and likely will – vary widely. Elizabeth’s cancers thus far have been focused in her brain, while Emily dealt with cancers both widespread (leukemia) and focused in a single area (breast cancer). Still, Emily feels confident in offering advice to her daughter whenever possible. It’s just that it’s less of a roadmap, more of a compass.

Emily isn’t the only one offering that compass, of course. She and Elizabeth now have friends all across the country, and while those friends may not know exactly what it’s like to walk in Emily’s shoes, they always answer her calls.

She knows that while her family’s story is unique, their need for compassion and comfort is far from it. Emily understands what other families are facing, so she is quick to ask for help on behalf of those other families. She says, “I tell everybody to give to the Ronald McDonald House. When people go to McDonald’s, I tell them to put the change in the box. It’s a big help.” 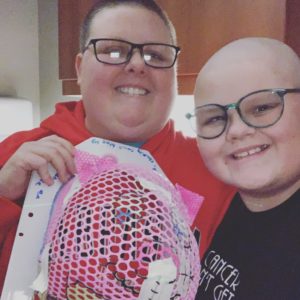