Allison Winter is a soft-spoken 18-year-old from a small town about an hour north of Knoxville, Tennessee. Her shy demeanor and quiet voice might initially be mistaken for apathy, but spend any time listening to her and it’s clear that couldn’t be further from the truth.

As a person with several chronic illnesses, Allison has gone through a lot. She’s suffered from various pains, been dismissed by doctors, and endured multiple surgeries. It would be understandable for her to look at all the negatives she’s dealt with and focus solely on herself and her circumstances.

And yet, Allison exudes warmth and kindness and a genuine care for others. Her experiences have shaped her into an entrepreneur, an advocate for disability awareness, and someone who wants nothing more than to help people facing the things she’s faced. She knows the journey is never easy, but she hopes to make it easier, in whatever way possible.

When Allison was four years old, she developed a pair of tumors in her digestive tract. Those tumors led to her intestine twisting and becoming obstructed, which led to the loss of most of her small bowel. This was almost 15 years ago, and at that time, the prognosis for children with Allison’s new condition – short bowel syndrome – was not encouraging, particularly in a smaller town lacking experience in the field of intestinal rehabilitation. Her mom, Pam, says the medical team told her that Allison would likely never be able to eat, that she’d have to survive on total parenteral nutrition (TPN), and because TPN can cause damage to the liver, that Allison likely wouldn’t make it to her 10th birthday. 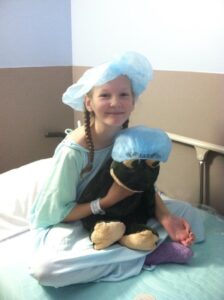 Needless to say, the news was hard to handle.

But that news wasn’t the only news available. “Thank goodness for the internet,” Pam says. “We met other families that were successful, and we found out about intestinal rehab programs, and it gave us a lot of hope.”

They traveled to hospitals in Cincinnati and Columbus, Ohio, among many others across the country. During those trips, they would often stay at Ronald McDonald Houses, where they felt support from strangers who would become a second family, which was important, as the Winter family is both large and very tight-knit.

“I have six siblings, my mom and dad, nieces and nephews; I have a lot of people helping me,” Allison says.

Her family is able to be even more supportive because Allison is not the only one in the family facing medical challenges. Her older sister battles chronic illness, as does one of her nieces. Plus, her parents began fostering children requiring specialized medical care when Allison was a bit younger, because as Pam says, “We had that knowledge, so we thought we could help with the foster kids. It’s a hard life dealing with the medical stuff, and they don’t have enough homes for foster kids, let alone kids with special needs.”

Allison was part of the driving force for that, saying, “I like helping take care of some of the younger ones. I like having little kids in the house.” She also had pushed for her parents to adopt a child younger than her (“She didn’t want to be the last child,” Pam says with a smile), and in 2020, they adopted a teenager. Much like the foster kids with medical issues, teenagers often face a difficult road to adoption, so Pam saw an opportunity to make that road less challenging. 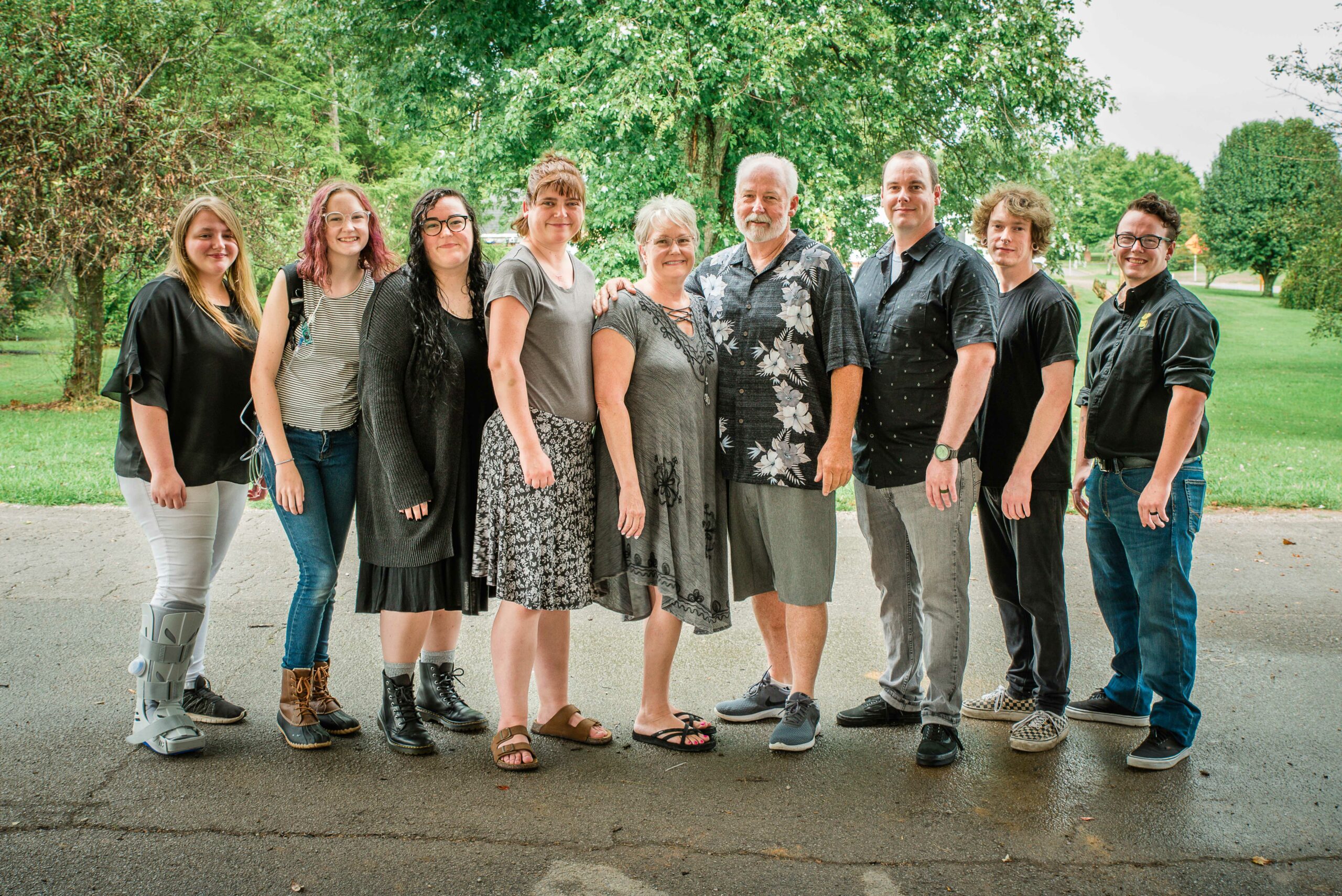 As the years went on, Allison’s condition would ebb and flow, as is the case for many short bowel patients. However, she started to notice a few additional symptoms. She dealt with aching hips and knees, without doing any kind of activity that would reasonably justify the pain. Eventually, she felt almost constant joint pain, with some joints slipping in and out of place regularly. She would often need to use a cane or wheelchair to avoid making the pain worse.

She would report her symptoms to doctors, but for a very long time, Allison didn’t receive any explanations for her pain. Anti-inflammatories weren’t helping, and unlike her short bowel syndrome, there were no scans or lab tests indicating anything was wrong, so she and her family grew more and more frustrated. People would look at her when she’s not in a wheelchair and say, ‘you look great.’ They couldn’t see what was going on under the surface. To make matters worse, some doctors seemed to either not believe Allison’s account of the situation, or dismiss her concerns outright, suggesting the pain was just a part of life.

Pam remembers thinking, “At 13, her hips should not be hurting so bad that she can barely walk. This isn’t normal.”

Physical therapy occasionally helped relieve some of the pain, but the real progress didn’t come until even more symptoms arrived. Allison would go for a walk, and her heart rate would spike to 140 beats per minute. She would battle bouts of dizziness after doing nothing more than standing for a few minutes.

She also experienced intestinal problems that were different from what she was used to, and it got to the point where she would feel intense stomach pain after every meal. Allison had no way of getting her nutrition other than getting back on TPN.

Eventually the concurrence of symptoms led to three separate but interconnected diagnoses. Postural orthostatic tachycardia syndrome (POTS) explained the dizziness and heart rate issues. Her POTS was likely caused by Ehlers-danlos syndrome (EDS), which also negatively affects collagen, which is why her joints had been hurting for so long. And the new intestinal issues were related to mast cell activation syndrome (MCAS), which essentially meant that Allison’s body was constantly acting as though she were exposed to allergens, even when she wasn’t. 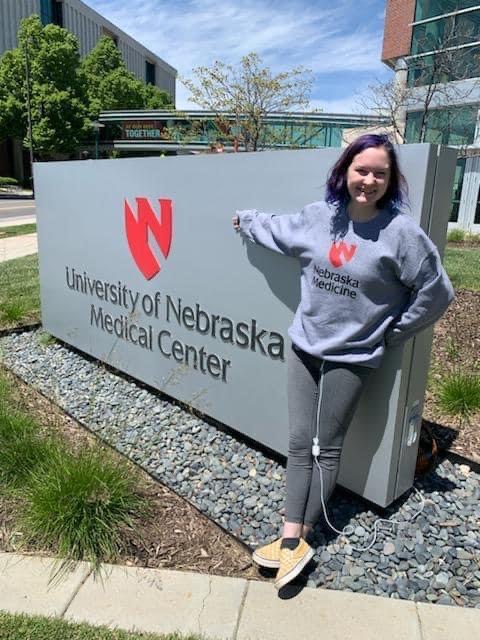 To help treat the intestinal symptoms, Allison and Pam looked at a few different options. Earlier on in their journey, they had heard of a program in Omaha, but it was far from home, and they wanted to explore closer options first. But these new symptoms created a roadblock, and to get over that, they made the call to visit Nebraska Medicine, with a team headed by Dr. David Mercer.

Almost immediately, it was clear they made the right decision.

Whereas many doctors would often focus on Pam during the appointment, asking her questions as if she were the patient, “[Dr. Mercer] really looks at [Allison], talks to her. He deals with her as much as possible,” Pam says.

Taking ownership of her medical care was a bit of a challenge for Allison, as was letting go for Pam.

Allison says, “It’s definitely hard transitioning from being just a kid to being the one talking to doctors all the time, not knowing what to say, and getting frustrated.”

Because her daughter is naturally so quiet, and Pam is, well, a parent, there were many times when Pam would struggle with the question of getting involved or not. It was like a game of double Dutch, and she didn’t want to jump in unless Allison was comfortable with it.

Both Allison and Pam agreed that, thankfully, “Dr. Mercer made it much easier.”

The first course of action for Allison was to place an ostomy to relieve the stress on her digestive system, and while she recovered from the surgery, she and Pam stayed at Ronald McDonald House Charities in Omaha.

Being in a Ronald McDonald House wasn’t a totally new experience for them, of course, although being in one during a pandemic certainly changed the way in which they experienced the House. Still, Pam says the House in Omaha feels so personal, adding, “We know the people here a little more. You see the staff all the time and get to know them. The staff feels like family, and they ask about you all the time.”

Pam also was able to meet an old friend for the first time. She had been talking to another parent for 10 years online and over the phone, discussing various hospitals and treatments and questions, and it just so happened that both of them had children being treated in Omaha at the same time. Pam says, “We’ve gone to the movies together, been shopping together, eaten meals together. It’s been really nice to have that.”

Allison has appreciated how welcoming the House feels, and how it’s allowed her more opportunities to interact with fellow short bowel patients in person. “I know a lot of people online, but not a lot of people with short gut, so it’s been cool seeing other people here who have it and understand it.” 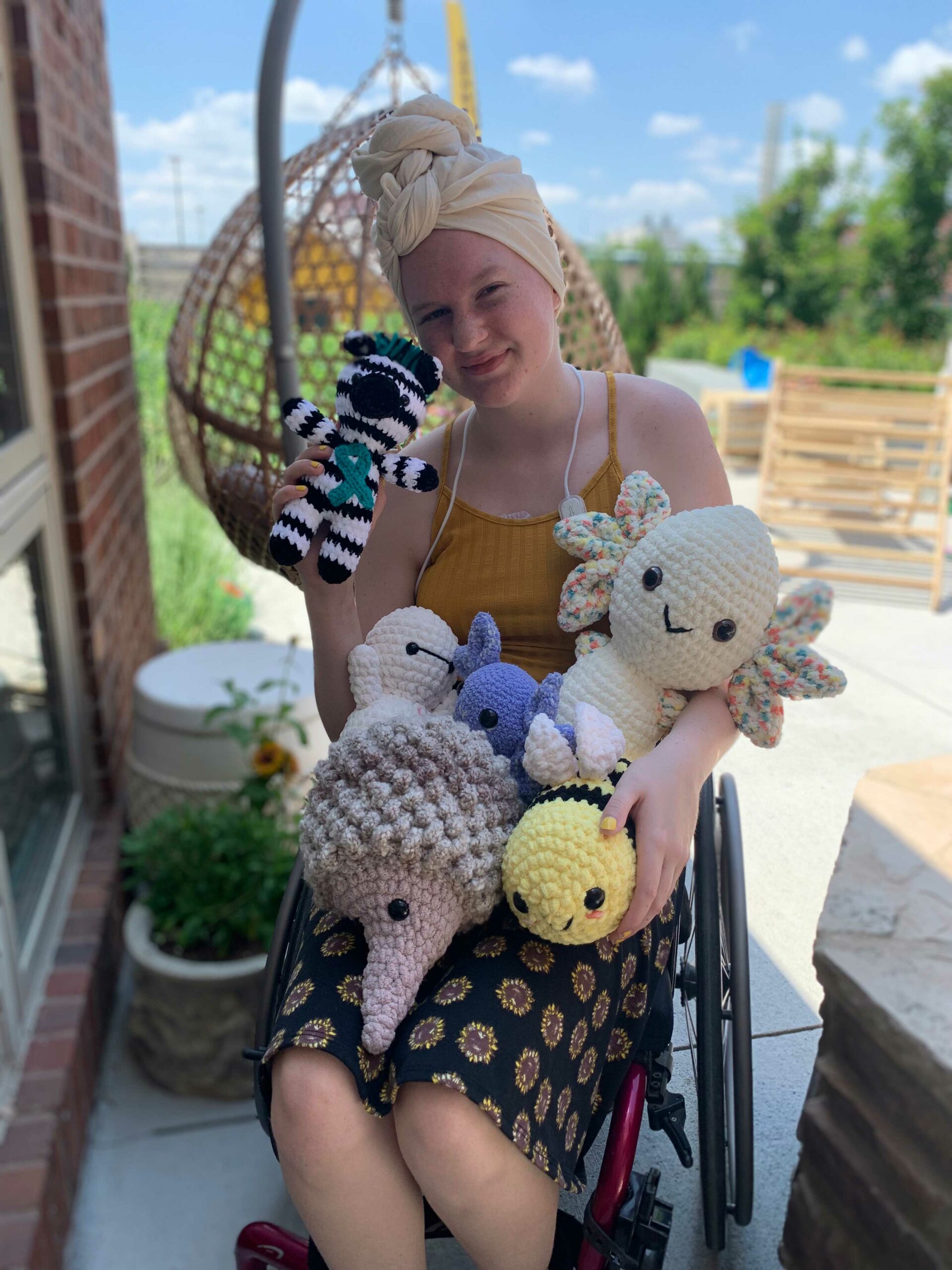 Because she’s lived with these various ailments for so long, Allison has knowledge she can share with younger kids going through similar things. Particularly because of her difficulty in getting diagnoses for POTS, EDS, and MCAS, Allison wants to help others, so in addition to speaking directly to people suffering from these conditions, she has also learned to harness one of her passions into a platform for raising awareness.

When Allison was about eight years old, she was looking for a hobby to help pass the time during her numerous hospital stays. She discovered crocheting on YouTube, and it’s grown from a part-time hobby into a full-fledged business, which was the focus of a local news story in 2021. What started with simple designs has turned into custom creations including various organs, stuffed animals, and “chronic cuddlers,” specifically geared toward children who spend much of their time connected to IV lines and pumps.

As word of Allison’s work grew, so did her platform; she now has more than 25,000 followers on her various social media accounts. Whether she’s debunking common myths around disability, highlighting some of her struggles, or sharing a cute video of her service dog, Chandler Bing, a soft-spoken teenager can amplify and use her voice to let others like her know that they’re not alone.

For Pam, seeing her daughter not only create a business that will hopefully allow Allison to support herself, but to also use that business to help others has been incredibly rewarding. “I’ve been so proud of her, finding a way to make a living with something she enjoys, and for getting out there and speaking about the issues we struggle with to help other people feel better.”

With the help of the team at Nebraska Medicine, Allison started feeling better too. After spending about a week in the hospital following the surgery, she joined Pam at the House, where she continued to heal. Early on, Allison had to be on TPN while her digestive system adjusted to the ostomy, but only four weeks after the surgery, she had weaned off it completely. To celebrate, Allison enjoyed a tasty meal of macaroni and cheese – without pain – for the first time in nearly eight months.

This is far from the end of Allison’s journey. It’s called chronic illness for a reason, after all. She’ll need to come back to Omaha regularly for checkups, and her condition will be monitored in case they have to change course along the way.

And on those trips, Allison and Pam appreciate that they have a welcoming and comfortable place to stay, at Ronald McDonald House Charities in Omaha. Pam says, “All the donations that make it possible, I’m sure it takes a lot to keep it running. Everything that’s here makes it easy for us.” 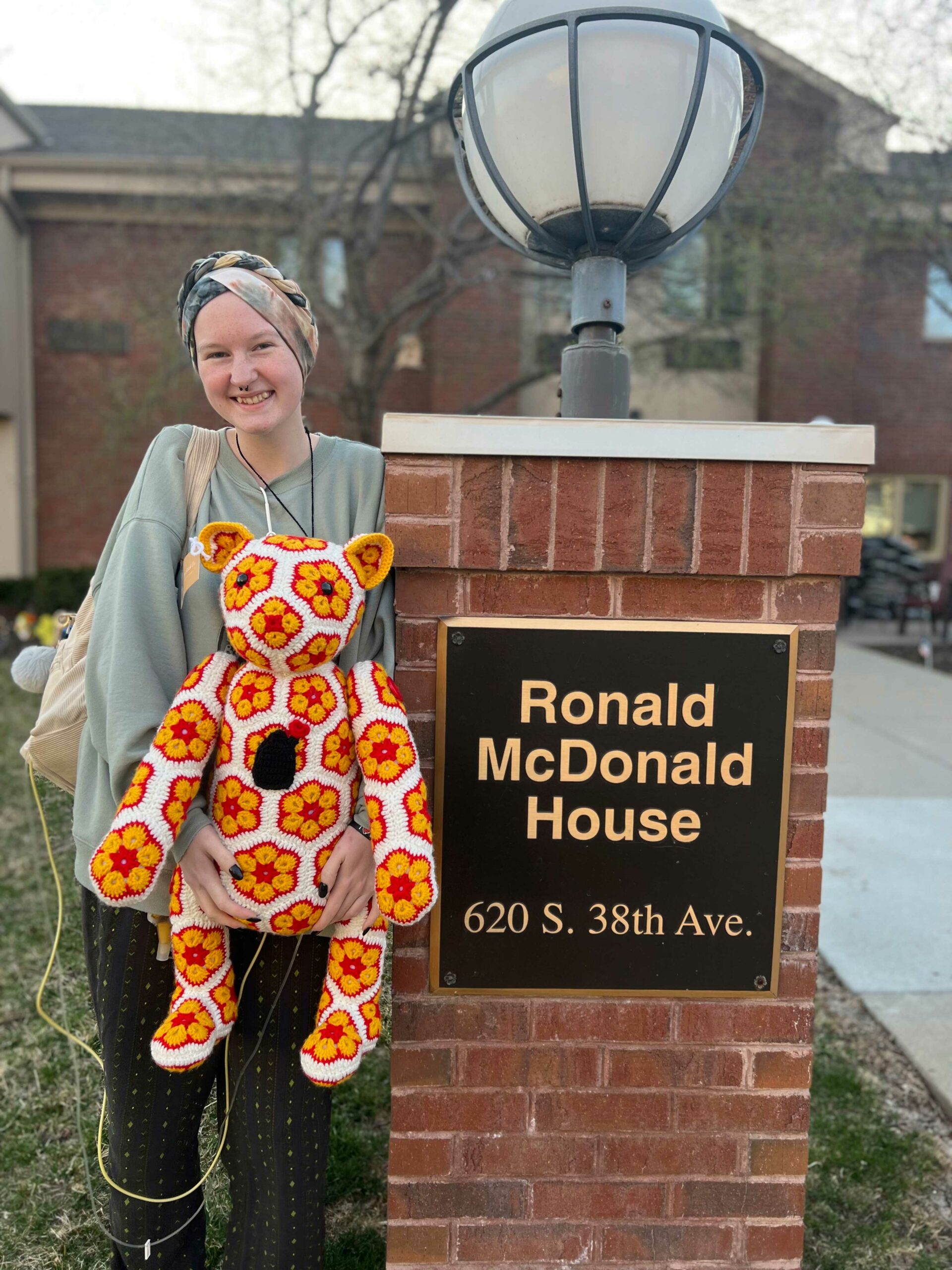 Will you join us in making things easier for families like Allison’s with a donation today?