If you’re like most people these days, you probably haven’t spoken those six words in quite some time. With millions and millions of individuals forced to stay home in the midst of the coronavirus pandemic, the entire idea of “going home” feels almost quaint. For the last several weeks, most people have been longing to leave home.

Of course, most people are not the Garrett family. Their 10-month-old son, Hayden, has yet to see his home. So when asked about their future, Hayden’s mother, Andrea doesn’t hesitate:

Andrea and her husband, Raymond, went in for some tests early on in her pregnancy, to her doctor near their home in Sidney, Nebraska. She had two older sons – 21 and 18 years old – neither of whom had any major health problems, so they didn’t expect anything earth-shattering. However, the test results indicated Down syndrome, and while ultimately the result was a false positive, they did begin to feel some cracks forming under their feet. Weeks later, the complications were laid bare. Another test revealed the baby had trisomy 13, also known as Patau syndrome.

Among the common effects of this condition are heart or brain defects, a cleft lip or palate, and severe intellectual disability. But far too often, the syndrome is fatal, with many patients dying in their first weeks or even days of life.

Hearing the diagnosis left Andrea devastated. She knew she and Raymond wanted this baby, but the uncertainty of the future created an uncomfortable contrast to her previous pregnancies. “I didn’t think I’d ever get to see him. I didn’t buy anything for him – no clothes, no diapers, nothing.” 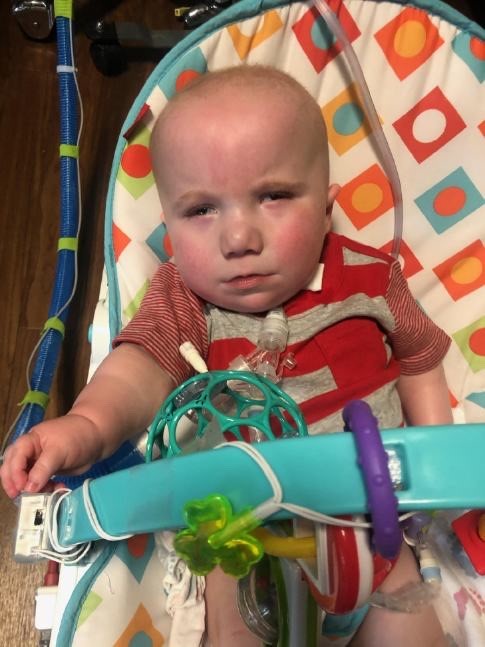 Determined to move forward, Andrea found a Facebook group with parents who’ve faced this challenge before, and in that group was a young mother whose child also had Patau syndrome. She suggested a doctor on the other side of the state, in Omaha.

In early 2019, they made the six-hour drive, and Andrea went through a full week of appointments, all of which seemed to suggest the baby was developing well in the womb. They headed back to Sidney until Easter, when Andrea went into pre-term labor. She was flown to Omaha before being stabilized, and in late May, gave birth to Hayden. He arrived six weeks early, weighing four pounds, nine ounces. Hayden was having difficulties breathing, so he was intubated and rushed to the NICU.

For the next six months, that is where he remained.

Once Andrea recovered from the delivery, she needed a place to stay, where she could be near Hayden at all times. A social worker referred her to the Ronald McDonald House, where Andrea says she immediately felt a sense of comfort. “I won’t forget walking in, and Vicky [Sheeler, Director of Family Services] showed me my room. I sat down on the bed and I cried.” She was overwhelmed by how loving Vicky was, and says “that meant everything to us.”

Andrea has had multiple family members with her throughout her stay. Her mom has been here for much of it. Her husband visits for a weekend a couple of times each month. Her older kids, as well as her two young grandchildren will also come to stay for a few days at a time. In all, Andrea says having that chance to feel like a family provides a sense of normalcy she’s needed. “It’s like healing for all of us.”

Beyond her immediate family, Andrea has also felt the support of her new family: the other parents staying in the House. She says being able to talk to others who are in similar circumstances has been crucial in her ability to cope with all of this.

“It helps me not keep everything bottled up inside. If I’m having a bad day, I can just talk to somebody. They’ll tell me, ‘You’re loved. You’re safe. You’re ok, and you’re going to get through this.’ And the parents are just living the same life we are. It doesn’t matter what kind of background we come from, or how much money we have or don’t have, we’re all the same.”

She’s learned this by getting out of her comfort zone and interacting with others more than she had been used to. “I’m a pretty shy person,” she says. But having opportunities to get to know other parents, like the activities coordinated with Completely KIDS, has helped Andrea expand her horizons and open up in ways she never expected.

Andrea has also felt inspired by the children in the House, saying, “These kids are so brave, and they run around like there’s nothing wrong. These kids are amazing. They’ll have some struggles in life but they just don’t show it, they don’t realize how strong they are.” 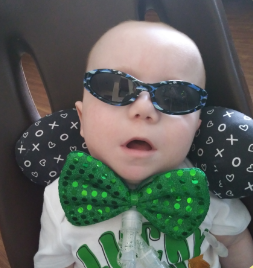 The strength Hayden has shown has also been remarkable. Despite his diagnosis, he’s grown to more than 22 pounds before reaching 11 months of life. Developmentally, Hayden is severely delayed, but Andrea doesn’t let that steal her joy when it comes to the little things. “Every milestone he makes, I celebrate.”

One such milestone was getting moved out of the NICU to a rehab facility, Ambassador Health. There, Hayden sleeps, eats, and goes through his therapies in order to push his development along. Andrea says every day, she’ll wake up, grab some breakfast, and then head to Ambassador to get Hayden ready for his day. It’s something both of them look forward to.

Andrea had recently gotten a brief respite, heading back to Sidney for a couple of days while her mom visited Hayden. When Andrea returned, she walked into Hayden’s room and started talking.

“He heard me, and he smiled. He’s hard of hearing, but he knew I was there, and he was so happy. It was crazy.”

She firmly believes that her ability to be near Hayden has helped him to thrive. By loving on him and providing daily encouragement – and lots of cuddles – she’s been able to not just observe his care, but to actually contribute to it. That’s something very important to Andrea, as she says, “I brought him into this world, and I’m going to be the one to take care of him.”

By having a room at the House, Andrea is able to fulfill that promise without worrying about where she’ll stay, how much it’ll cost, what she’ll eat, or anything else. She can simply be what she needs to be: his mom. 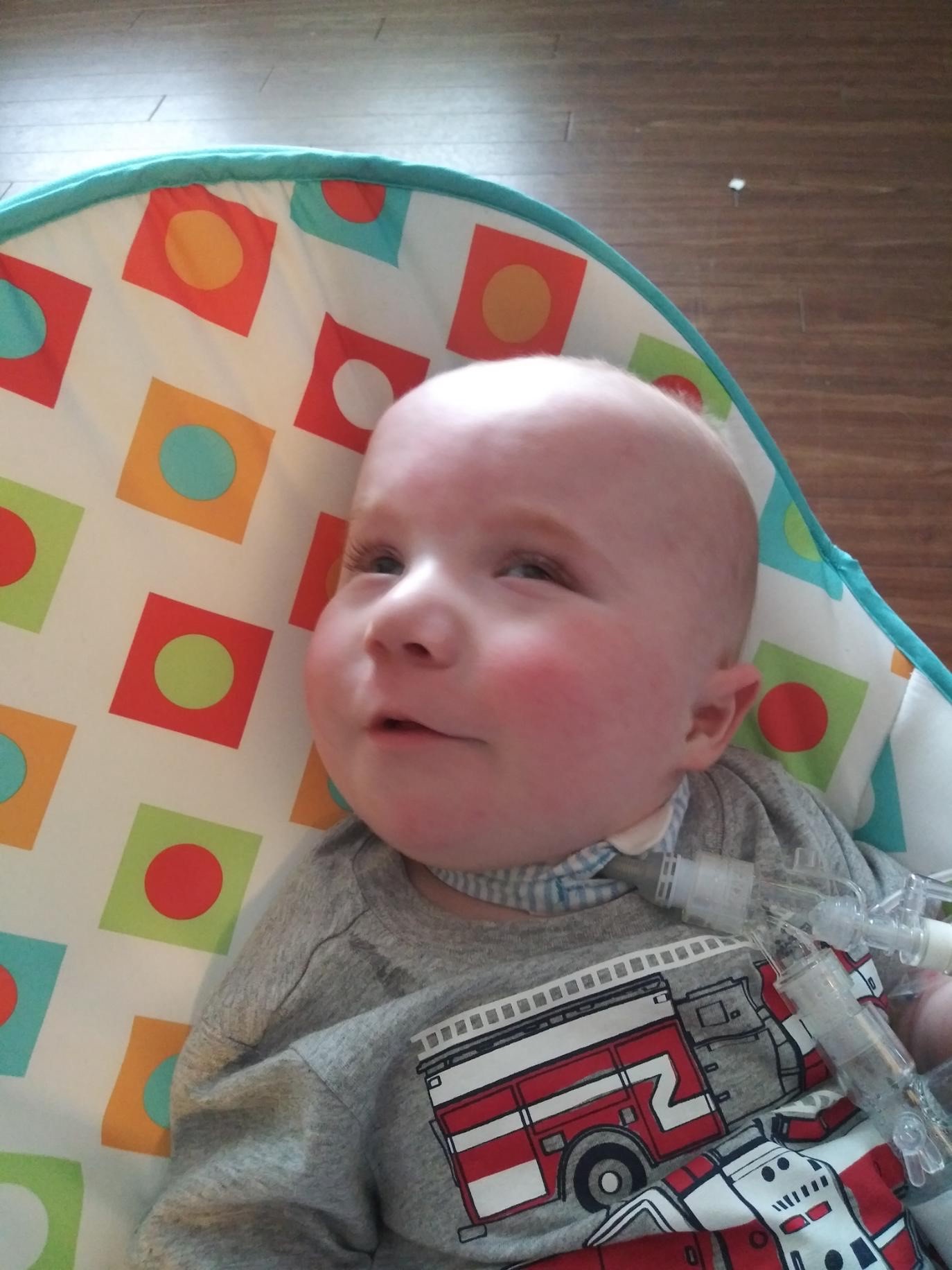 One of the things Andrea regularly does for Hayden is to weigh him, and lately when she’s done that, she’s taken him off his ventilator for a minute or two at a time. His condition significantly affects his breathing, so while a minute off the ventilator may not seem like a huge deal, until recently, even removing him from it for a few seconds sent Hayden into severe pulmonary distress. Andrea says they had to use a manual resuscitator to help him breathe again after coming off the ventilator, or when he would become frustrated, or even for something as innocuous as a bowel movement.

But now, they’re able to take Hayden off the ventilator for several minutes at a time, and they’re working up to three hours of breathing on his own.

“No one understands how great this is,” says Andrea.

Another part of Hayden’s development process is for Andrea to take him out of the facility on passes of increasing length, including a 48-hour pass during which they’ll go back to Sidney so the first responders there can become acquainted with Hayden and his needs. Aside from that being the first time Hayden will travel to Sidney, it will also pave the way for him to receive the care he needs if anything happens.

Through Project Austin, an initiative from Children’s Hospital and Medical Center, those first responders can receive critical training on how to approach Hayden should an emergency arise once he is home. Andrea is beyond grateful such an opportunity exists: “It’s pretty amazing.”

Andrea has loved taking Hayden out of the facility, and she was truly looking forward to going home after all the progress he’s been making. All of which has made the current situation that much more disheartening. Hayden’s compromised immune system means he couldn’t leave, so the two of them have been quarantined at Ambassador for the last few weeks.

She says it’s been extremely challenging to deal with the new circumstances without being around her “House family.”

Despite being away from the House, Andrea has remained in contact with the staff and other families, providing updates and receiving encouragement. Because of her experience here, Andrea knows she can always reach out to the people who care about her and her family.

She also wants her family to be whole again, and to take her son to see his house for the first time.

She wants to go home.

Editor’s note: After nearly 11 months in Omaha, on April 20, Andrea was given the go-ahead from Hayden’s medical team that the family could return to Sidney.

To support families like Hayden’s at their home away from home, donate here. 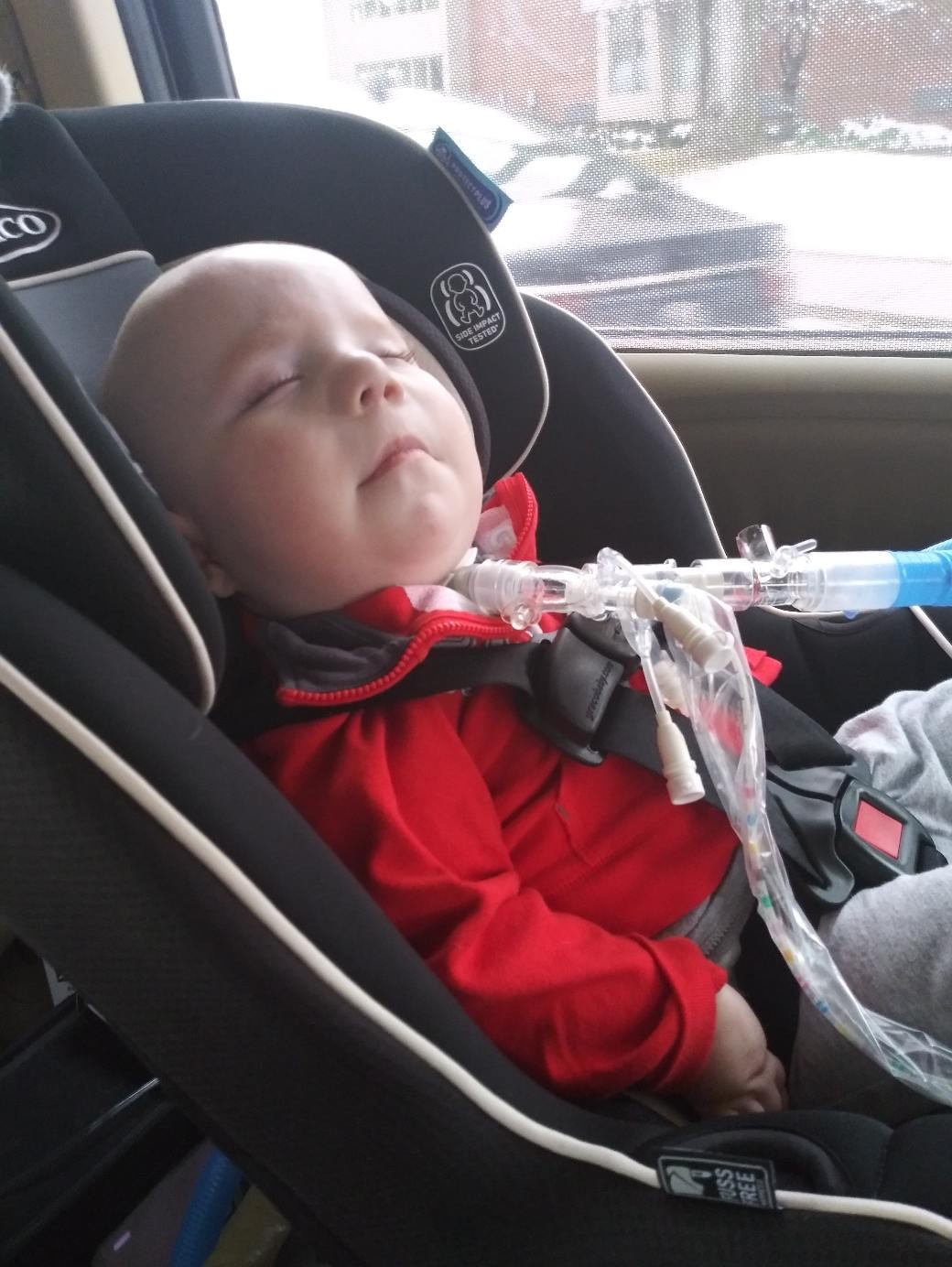