Lighting up Lives, in all Corners of the House

He had a light that could lift the spirits of anyone around him.

She wanted to ensure that light would continue to shine as bright as ever, well into the future.

Their friendship, a bond so strong and so enduring, that from something unimaginably painful sprung forth something indescribably beautiful. 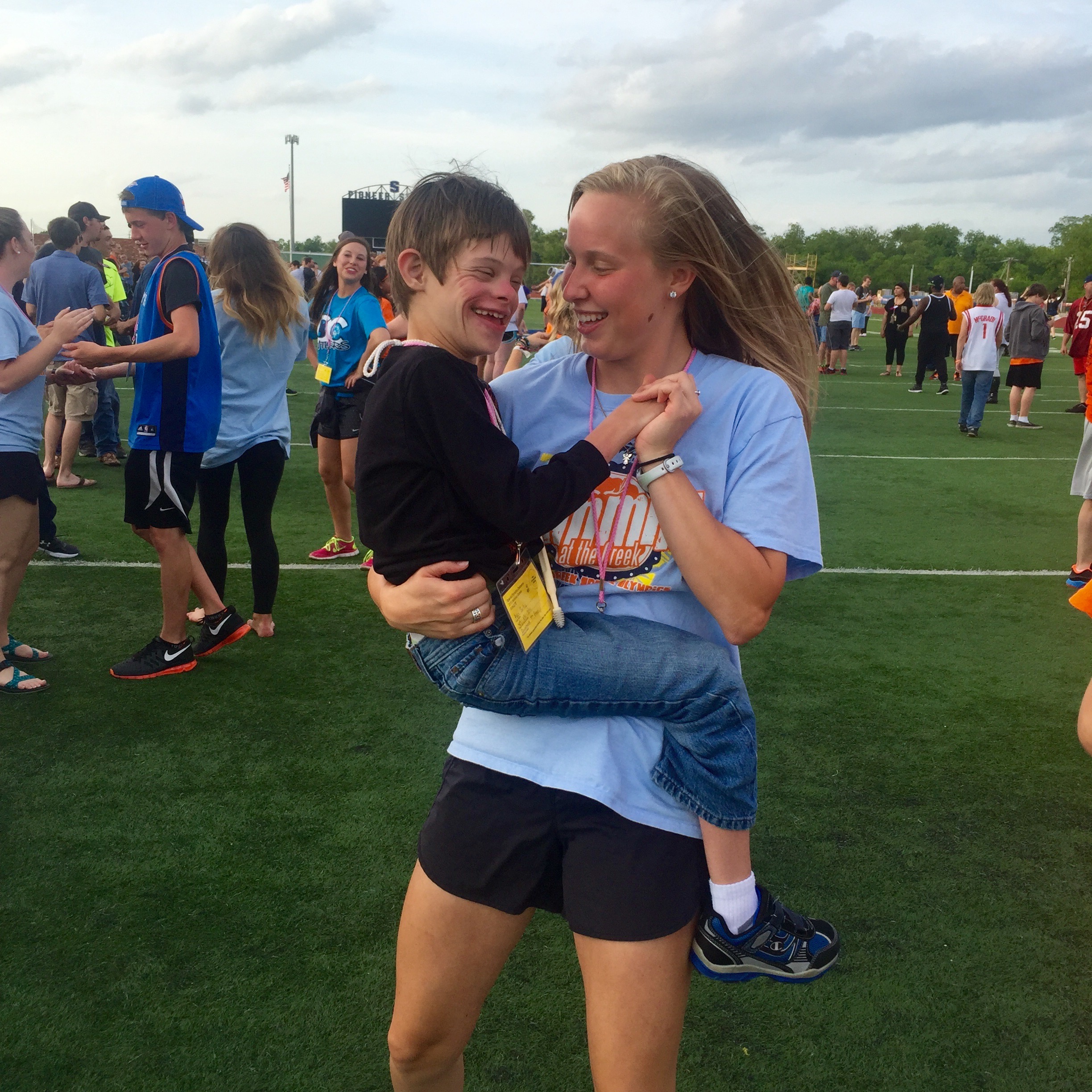 Mackenzie Coupens was 11 years old at the time, and she recalls standing with her friends during gym class when she noticed a young boy playing basketball by himself. Mackenzie walked over to say hello. The boy took her hand and walked her to his classmates in the special education class. It was there where Mackenzie met 12-year-old Clayton.

“From that first 30-second interaction, you just knew that he was a light in everyone’s life,” Mackenzie says.

She says Clayton was the “happiest, giggliest, funniest little kid you would have ever met.” He wore a massive smile, loved to tell jokes, and made a habit of making people’s days brighter.

Clayton Owen was born in the spring of 1997 to Debi and Alan Owen in a small town outside of Oklahoma City. He had Down syndrome, and with that diagnosis came a small stature that belied his incredibly big heart. No matter what was going on, Clayton greeted everyone with a smile and a hug.

He graduated high school in 2018, less than a year after he lost all his small intestine. Two years later, he was listed for, then received, a small bowel transplant at Nebraska Medicine in Omaha. Debi stayed in the Ronald McDonald House, with Alan visiting on weekends. Debi says the support she felt from House staff was overwhelming.

“I would go to Vicky’s office every day,” she says, referring to chief program officer

Vicky Sheeler. “I always had Vicky and Mac [program manager Mackenzie Leahy] to talk to. They were always there.”

Unfortunately, the recovery took its toll on their son. A four-month stay in the hospital was followed by several more months in and out of it, and eventually Clayton’s body could no longer continue. He passed away in April 2021.

Clayton’s memory lives on in how much he impacted others, best exemplified in his caring, warm demeanor. He simply loved people, and that was rarely truer than with Mackenzie.

Debi describes their friendship as “one of a kind.”

For the next few weeks after that initial meeting, Mackenzie would spend much of her gym class hanging out with Clayton and his friends. Mackenzie wanted to do more. She knew the special needs class could use extra help educationally, but she also wanted to be an advocate for them, a connector who could assist with some of the social difficulties they often face.

She wanted to be a friend.

“I set up a meeting with the principal to pitch this idea, to use one of my electives to work in a special education classroom,” she says. The initiative required proposals to, and the approval of, the principal, the vice principal, and even the superintendent.

It was an intimidating process, of course (“No one likes being in the principal’s office,“ Mackenzie jokes,) but she was so passionate about helping others that she was not deterred. And after all the meetings, her idea became reality.

A sixth grader convinced her middle school to start a service-learning program. Two years later, she convinced her high school to do the same, and more than a decade later, both programs still exist, with kids choosing to make an impact on children with special needs year after year. But, as Mackenzie explains, that impact goes both ways: “The joy that all of those kids brought me was this monumental thing. Looking back on it, there are so many people that are in my position [as a mentor] that are getting the influence from those kids. And that changes your life forever.”

Once their interactions became more regular, Mackenzie and Clayton were nearly inseparable. She would join his family for bowling nights and trips to the Special Olympics. They’d spend hours at the zoo, where Clayton loved seeing the elephants, giraffes, and most of all, okapis. (For the unfamiliar, an okapi looks similar to a deer crossed with a zebra but is actually related to a giraffe.) 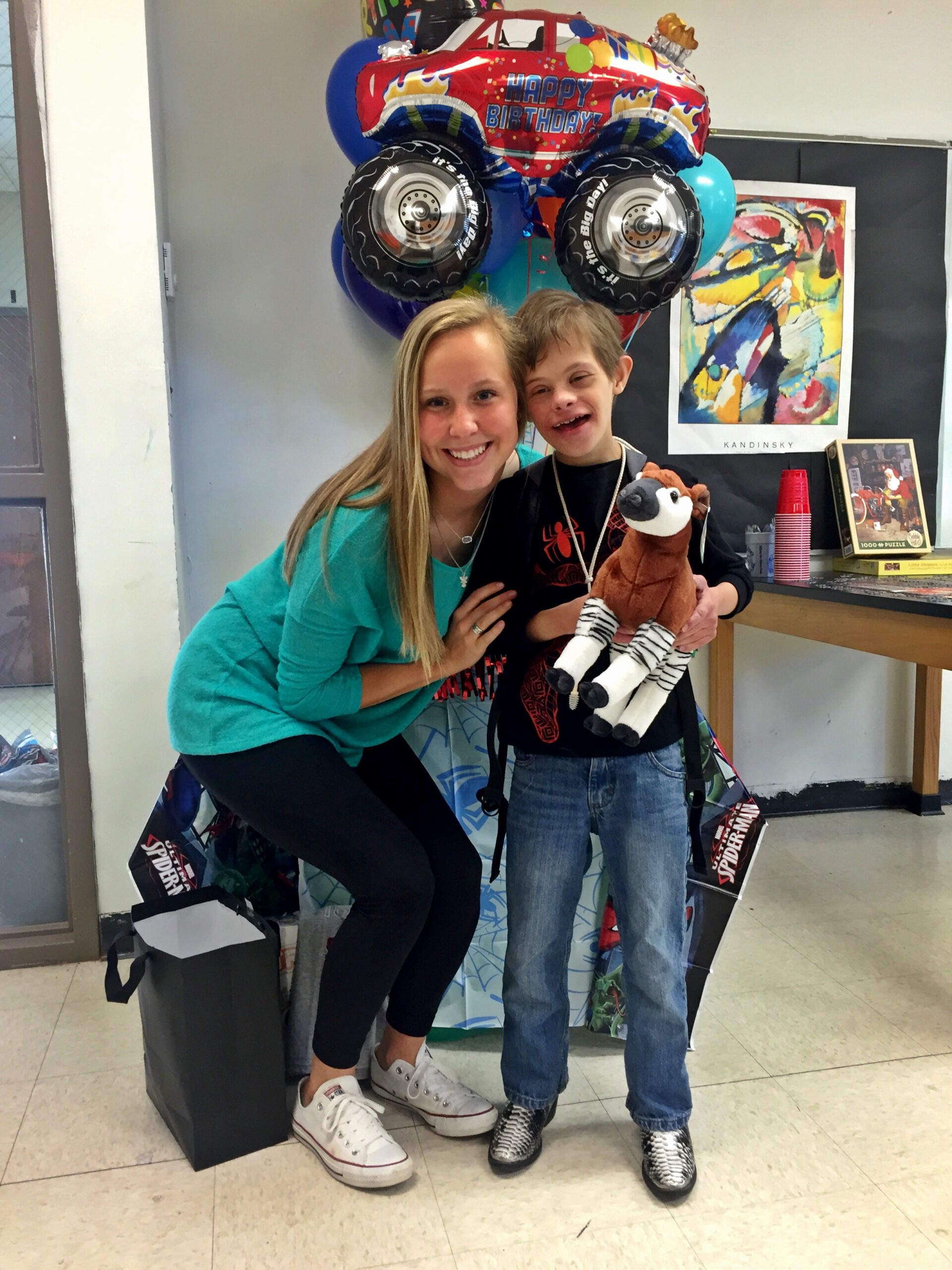 Mackenzie knew Clayton loved okapis, so she started to look for a stuffed one to give him as a present. As it turns out, stuffed okapis aren’t as easy to find as other stuffed animals like bears, dogs, and monkeys. But Mackenzie didn’t stop searching, and while it may have taken months, seeing Clayton’s face when he opened that gift was well worth the effort.

Even after Mackenzie went off to college in Tulsa, she was sure to make the three-hour round-trip as often as possible to spend time with her friend.

In fact, one of Mackenzie’s favorite memories with Clayton came from one of those trips home: “I was in college, but he asked me to be his prom date. I came home, we got all dressed up – he looked so handsome in his suit – and we went to prom and had so much fun. He got me a corsage, and I got him a boutonniere, we went to dinner, and we danced the whole night on the dance floor. We had such a blast.”

No matter what Mackenzie was going through, seeing Clayton would always make her smile. And no matter what Clayton faced, his smile never faded.

“Looking at Clayton and the hand that he was dealt, he could have been sad, and he could have been angry. But without fail, he was the one person that always had a smile on his face. Even the months that he spent in the hospital, there was always a smile. And that joy, that happiness, it really rubs off on other people. I think it got bigger and brighter as I knew him more and got to know his family and see the impact that he had on his parents. It was really beautiful.”

Over the years, Mackenzie’s relationship with the Owen family also grew. She says the Owens were “absolutely a second family” to her, showing up to her birthday parties, her college soccer games, and various other big moments in her life.

The Owens look at Mackenzie as “an extra daughter.” Alan continues, “We knew we could always count on her to be there for us, and for him.”

Mackenzie says for a long time, she would frequently call Debi and Alan just to see how Clayton was doing. “We talked, honestly, every single day for probably 10 years.”

When coming home from college around the holidays, Mackenzie’s first visit was always to Clayton. She was always the first to call when he was in the hospital. While Clayton had lots of friends growing up, Mackenzie stuck around when it would have been easy for her to fall away. 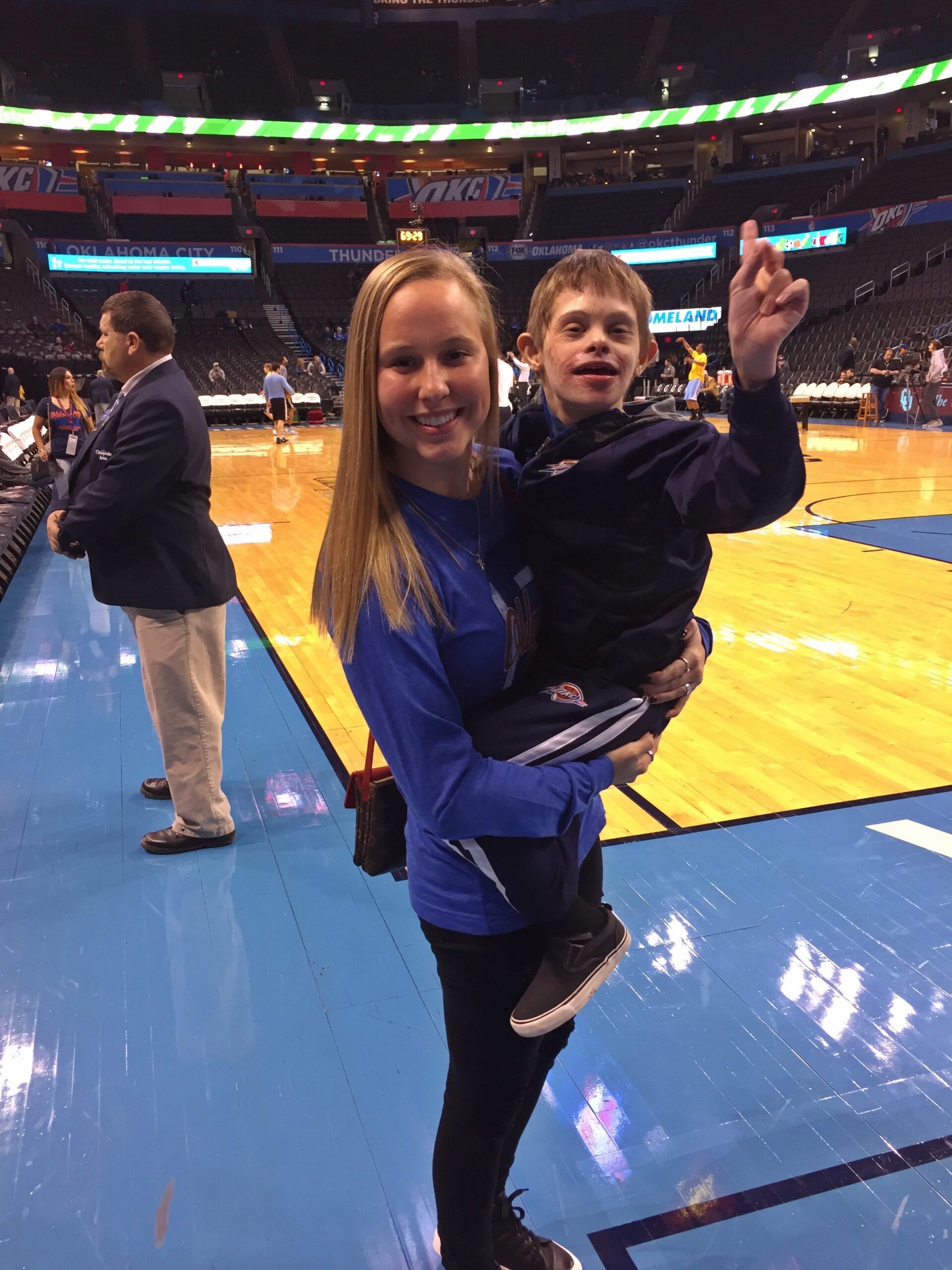 At one point, Alan starts to say it’s been nice to have Mackenzie there for this past year, as someone outside of the family they could lean on, but he immediately corrects himself: “She’s a part of the family.”

Alan says, “We’ve never really encountered anyone quite like her.”

It’s that kind of connection that made the decision to honor Clayton an easy one for Mackenzie and her family. The Coupens family established a small foundation years ago and raised their children on the importance of giving back. At the end of every year, they would discuss organizations they wanted to support. Often, it was the American Heart Foundation or a similar nonprofit, as Mackenzie’s brother has dealt with a heart defect for his entire life.

Last year, Mackenzie wanted to do something different.

“I think Debi felt really loved and supported, and for me, witnessing that she was able to have [the Ronald McDonald House] where she could just be with her thoughts was amazing.” But Clayton was no regular kid, so Mackenzie didn’t want it to be “just a regular donation.”

“I wanted it to be something that the kids could enjoy while they were there.”

Unbeknownst to Mackenzie, the team at RMHC in Omaha had been working on something to that end. They had contacted a local artist, Watie White, to create an art installation of small sculptures hidden throughout the House. The idea was to give the kids a scavenger hunt, of sorts, where they could use their imagination to create stories connecting the various groupings of sculptures.

When the Coupens family called to talk about the tribute, the RMHC team discussed their art installation idea and how it would be customized to honor Clayton in the best way possible, and Mackenzie says, “it lit us up.

“My immediate thought was that this is something [Clayton] would have loved. He would have loved walking around and searching for all these little animals and going on a scavenger hunt.”

While work began on the development of the pieces, Mackenzie told Debi and Alan about the plan.

Alan says, “We were just floored by it. We felt so blessed that the Coupens family would do that.”

For all of them, knowing that Clayton will continue to bring joy to others for years to come has been an enormous comfort.

Mackenzie says, “I think it’s amazing, to honor him and let his life and his story live on. Because it lives on in the people that knew him, and those of us that got to experience his love and his joy, we’ll have that forever. But knowing that his story can touch other people is a beautiful thing, by giving others a chance to see that and know that there can be good things that come out of these hard situations.”

Alan agrees, adding “It’s soothing to us. There’s a knowing that there will be that legacy there, that he’s still having an impact on people.”

Clayton always found a way to make someone’s bad day better, and with this art installation, made possible by his best friend, he’ll continue to do just that. 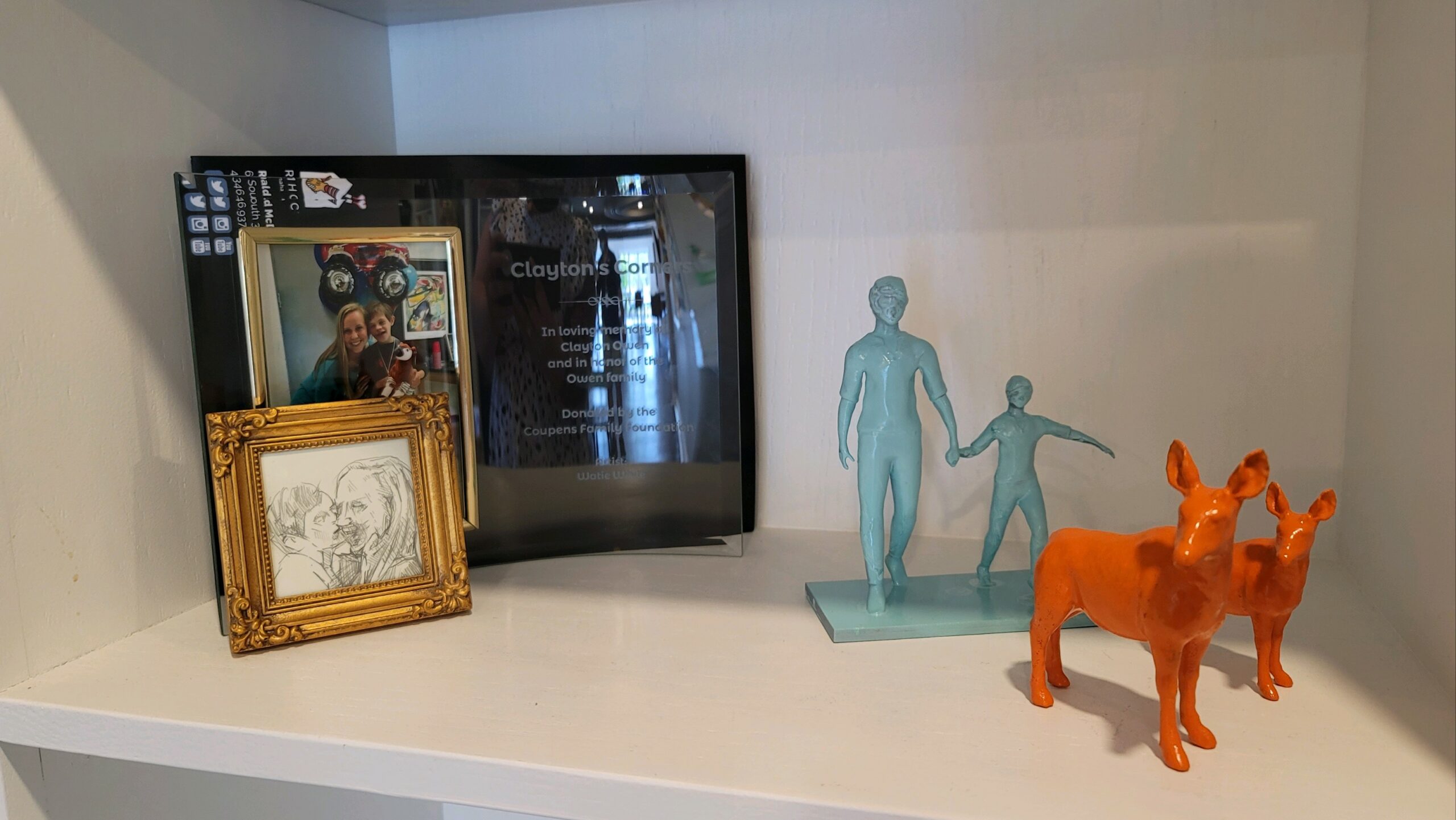