Those were the words Victoria heard when her daughter was just three months old. The five surgeries Mireya had endured hadn’t done enough to restore life to her digestive system, and the doctors realized their facilities weren’t capable of treating this complicated condition.

The 20-year-old first-time mother didn’t have time to process what she was hearing. She didn’t need to. She knew what needed to happen. She told the doctors, “Wherever she has to be, I’m gonna go.”

Where Mireya had to be was Omaha, Nebraska.

In her mother’s words, Mireya is “one heck of a child.” When she’s not watching cartoons on her mom’s phone, she’s perfecting her selfie style on Snapchat, or making those around her smile with her infectious giggles. She’s an opinionated 22-month-old, and as the only granddaughter in the family, you could say she’s spoiled. “Very,” Victoria adds.

While Mireya has some typical toddler traits, her life has been anything but typical. When the doctors saw a blockage in the baby’s stomach during the 20-week ultrasound, Victoria was informed that her baby would go through a small surgery shortly after birth, but that it was a relatively simple procedure.

In June of 2016, Victoria went into labor five weeks ahead of schedule, and was driven to the hospital near her home in Lubbock, Texas. Mireya was born, and as expected, was rushed into the operating room for her surgery. Unfortunately, the procedure did not go as expected.

The doctors discovered that Mireya’s intestines had become wrapped in a knot, effectively cutting off blood flow and killing the tissue. Her intestines were placed in a silo bag, with the hope of bringing them back to life.

Victoria was still in her own hospital room recovering from the delivery when she heard the news. “I had no words. When they told me that there was going to be more to come, that’s when I broke down.”

The silo bag did not help as much as the doctors hoped, so the next plan was to place Mireya’s intestines back in her stomach, where perhaps their natural environment could revitalize them. A month later, surgeons checked on Mireya’s condition, but there still was no progress. 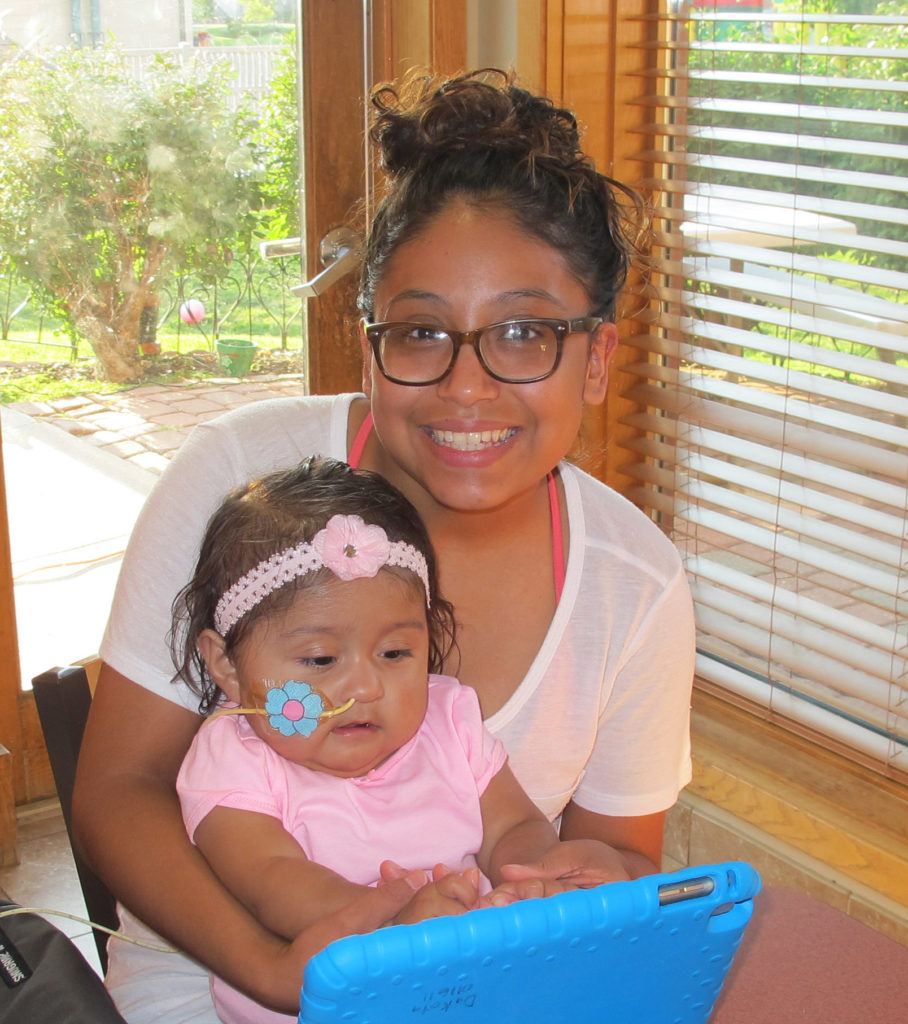 Mireya’s months-long inpatient stay was also taking a toll on Victoria. “It was traumatic.” But she knew she couldn’t focus on the negative. She had to look forward. She had to be strong. She had to fight for her daughter.

“No matter how hard it was for me, it wasn’t about me anymore. It was about this child of mine having to go through the biggest, most terrifying thing in her life.”

It was in late September when things took a turn for the worse, and Mireya was referred to Omaha. She was transferred in early October, at which point Nebraska Medicine evaluated her for their intestinal rehabilitation program. Her condition was so poor, however, that it was not a viable option. A transplant was the only path to improvement.

Mireya was officially placed on the transplant waiting list shortly thereafter. Victoria was told it can sometimes take up to a year for organs to become available, so she prepared for a long wait.

The wait for organs wasn’t the only wait Victoria experienced. When Mireya was initially transferred, Victoria was told about the Ronald McDonald House, but at that time, all 20 rooms were full, so she had to be placed on a wait list until a room opened up. During that time, she slept in the hospital room, on a couch at Mireya’s side, night after night. After a couple of weeks, Victoria was informed that the House had a vacant room. She was excited to have her own comfortable bed and private bathroom, but she was also uneasy when she first walked through the front doors.

“I didn’t know anything about this place. I just thought it was like a hotel where you don’t run into people. I met Vicky [RMHC program coordinator], she gave me a tour, and I saw families chatting and watching television together. She was more than welcoming, and made me feel better about everything.”

Victoria called her family so they could travel up and be there for the surgery. The next night, Mireya received a new small bowel, liver, and pancreas during a 12-hour procedure. “It was the longest night of my life,” Victoria says.

Following the transplant, Mireya still had some recovering to do in the hospital, so Victoria had fallen into a simple, yet exhausting routine. She would wake up early in the morning, head to the hospital, spend the entire day at Mireya’s side, then go back to the House to fall asleep and do it all over again the next day. Victoria was worn down, and she told the social worker at the hospital that it was so hard doing this on her own. The social worker urged Victoria to go to the House for dinner, where volunteer groups prepare full meals. She says she had been spending a fortune in the hospital cafeteria, so she thought she’d give the House kitchen a try. 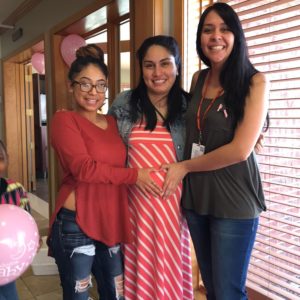 Victoria says she immediately connected with a pair of moms, Kylie and Maria (read Maria’s story here). “We hit it off quick, fast, and in a hurry.” She hadn’t realized it before, but having that support system at the House waiting for her after a day in the hospital was absolutely crucial.

“I knew that when I came here, I wasn’t alone.”

She had friends to whom she could vent after difficult days, and with whom she could celebrate the good ones. Even though their children didn’t have the exact same diagnoses, their shared experience created a powerful bond, giving them the strength to overcome their challenges together. They became family.

Nearly two months after her surgery, Mireya was able to be discharged from the hospital. Victoria was elated when she heard the news, so she came back to the House to ask Vicky about getting a crib. She disinfected the room, set up the crib next to her bed, and decorated the space so it was welcoming for her baby girl. “That was a happy moment right there. To be able to wake up and not have to go over there [to the hospital], to just wake up and she’s right next to me…that was the best.”

Mireya continued to improve, and the two of them were able to go back home to Texas around Easter. Their stay did not last long. Less than a week after returning home, Mireya had to be admitted to the hospital. While there, with Victoria by her side, she began seizing. As her daughter lie there in the middle of a grand mal seizure, Victoria feared the worst. Her heart pounded. Her mind raced.

‘Am I going to lose my child?’

She had long accepted the fact that hospital visits would become the norm. She knew the doctors at Nebraska Medicine were capable of treating her, but as the seizure continued, Victoria was struck with a terror she never expected. “I didn’t know if she was going to make it here.”

Twenty-seven minutes later, the seizure ended. Mireya was life-flighted to Omaha, where the doctors tried to find the cause. She underwent rounds of testing, and fortunately there was no evidence of brain damage. Victoria was able to breathe again, and she was once again surrounded by her friends in the House.

This new complication was yet another thing about which Victoria needed to learn. Early on, it was a daily struggle to take in everything the doctors told her, in addition to learning how to handle her new duties as a caregiver. Victoria could have simply let the nurses do everything, but as she says “That was my job as a mom, I had to step up.”

She learned how to bathe Mireya properly without affecting her lines, change her dressings, and do anything else her baby needed. It wasn’t always easy. The first time Victoria attempted to change dressings, Mireya wasn’t the only one crying. Seeing her child in such pain was excruciating enough, but this time Victoria knew she was causing that pain, and it broke her heart. “I had to hold back the tears and do it, because she needed it.”

So she kept working, and kept learning, and soon enough, she was able to handle everything for Mireya. Victoria was confident in her newfound abilities, and Mireya had gotten accustomed to the various procedures – a sobering reality, upon reflection. “Those are the things you don’t want your child to learn. It freaks you out because she’s still a baby but she knows what’s coming, so she just relaxes herself for it. It’s sad that that’s what she knows.”

Victoria adjusted to her reality, too, with the help of other parents in the House. She also loved being able to talk to the staff whenever she needed to do so. “I really enjoyed having open doors. No matter who it was, their door was always open to talk about stuff.”

After being impacted by the families, staff, and volunteers who come to the House, Victoria wants to pay it forward, so she’s planning to volunteer at the Ronald McDonald House in her hometown. She wants to make a difference. She wants to change a life in the way that her life has been changed by those around her.

When asked how she’s been able to stay so strong in the face of so much adversity, Victoria pauses thoughtfully as a smile stretches across her face. “What wouldn’t you do for your child? It’s not about me. I’ve struggled and everything’s been a toll, but there’s nothing any parent wouldn’t do for their child. To see her smile at the end of the day is what gets me through it, just to know that she’s smiling and she’s happy. That’s how I do it.”

“What wouldn’t you do for your child? It’s not about me.”

Victoria is a fighter. She never stops fighting for her child, so we’ll never stop supporting her in that fight. Show that you’re for the fighters, too. Donate now. 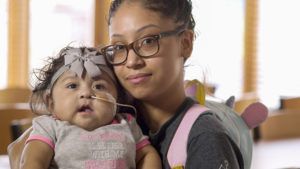