Finding Community in the Chaos 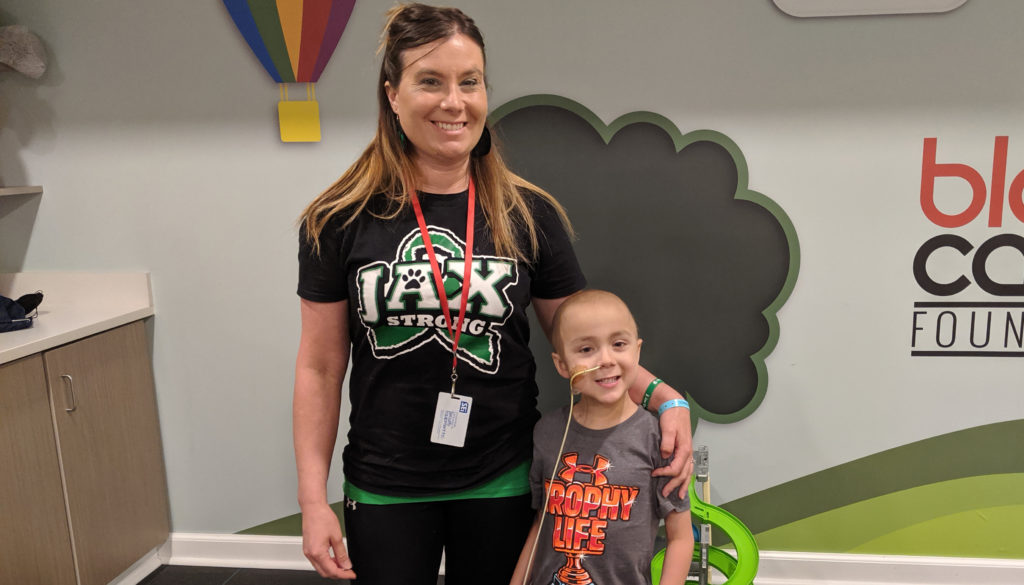 When Jax was born six weeks premature and had to spend more than two weeks in the neonatal intensive care unit, his parents expected him to deal with a few health issues in the early part of his life. His mom, Charollette – or Charlie, for short – says that much to her surprise, Jax only had one ear infection, and largely avoided many of the medical concerns that can plague preemies. Which is what has made the last seven months seem even more surreal.

Jax is the youngest of three children, with Charlie and husband Justin having two daughters before him. They live in the small town of Mitchellville, Iowa, just outside of Des Moines. On January 4, the family made the twenty-minute drive into Des Moines to a hockey game. Five-year-old Jax was complaining of a stomach ache, but Charlie and Justin didn’t think it was anything out of the ordinary. He felt fine throughout the game, however when they were leaving, Jax and Charlie were running across the street and hit a patch of ice. They crashed to the ground, and even though Jax appeared to be okay, he did bump his head on the ground, so his parents took him to the emergency room.

After doctors found no significant trauma from the fall, Charlie asked if they could take a look at Jax’s stomach, just to be on the safe side. They did a quick exam, and it seemed like he was simply dealing with constipation. The doctors sent him home and instructed Charlie and Justin to keep an eye on him.

Over the next week, Jax rode a bit of a roller coaster in regards to his symptoms. He would feel well for one day, then feel miserable the next. Charlie noticed a small lump on his stomach that she thought could be a hernia, or simply a build-up in his intestines. An initial x-ray suggested the latter, which allowed Charlie and Justin to breathe a sigh of relief. Unfortunately that relief didn’t last long.

Following another few up-and-down days, Jax felt terrible. It was a Sunday, and Charlie was working her typical shift on the oncology floor at Blank Children’s Hospital in Des Moines. Justin was concerned with Jax’s condition, so he brought him to the hospital for an exam. He got an x-ray followed by an ultrasound, at which point Justin called Charlie.

“You need to get down here.” 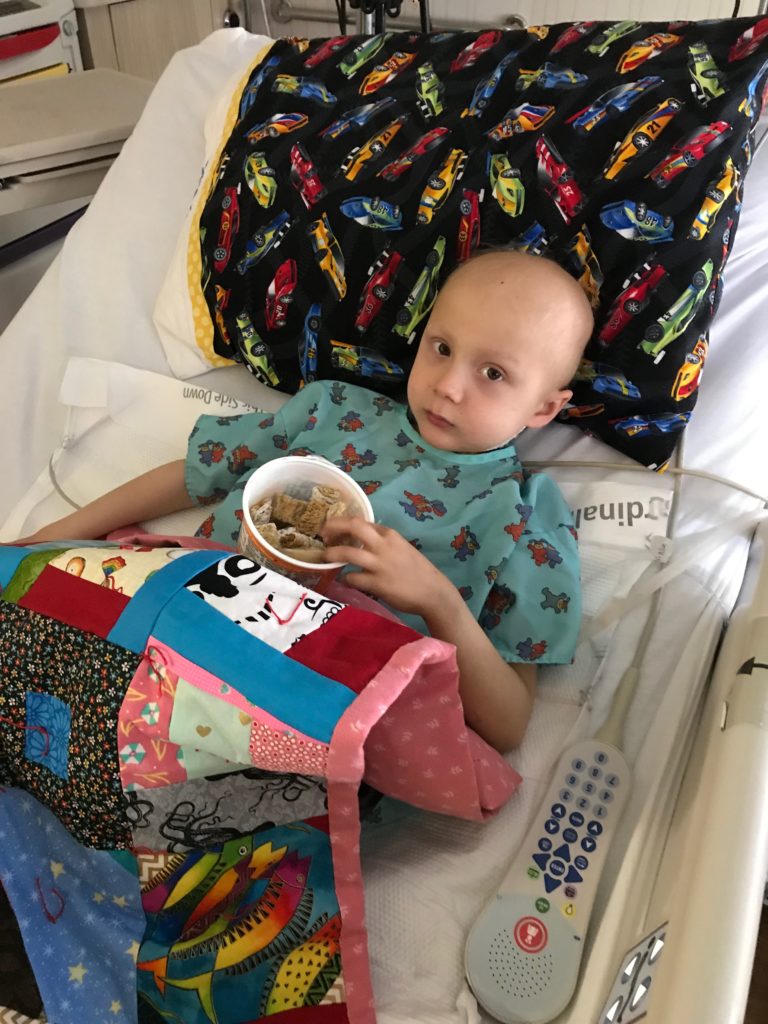 They found a mass on his liver. While Jax’s blood work initially came back clean, a follow-up test revealed what they feared: a tumor. A biopsy confirmed the diagnosis. Jax had cancer.

The news was devastating, particularly for Justin. Charlie says her medical background helped keep her calm, but it took a bit of time – along with encouragement from Charlie – for Justin to cope with the diagnosis. The family also found solace in their hometown. As is the case with many small towns across the country, Mitchellville rallied around Jax with incredible zeal.

Charlie says, “We had a huge support system with our friends.” In addition to the emotional support provided by those closest to the family, the local Lions Club hosted a soup supper fundraiser, which raised more than $5,000 to help with everything the family was now facing. In recalling all the town did for her family, Charlie feels the emotions welling up. “We never could have imagined that. It was incredible.”

Jax was diagnosed with hepatoblastoma, a rare type of cancer that starts in the liver, but can often spread elsewhere. In Jax’s case, he developed some spots on his lungs. He had to start chemotherapy right away. For the next four months, Jax went through several cycles of chemo in the hospital to shrink the tumor. The tumor did shrink by 75 percent, but the spots on his lungs were still there, and the tumor was still pressed against a main artery.

The next step in his treatment plan called for more chemo, this time as an outpatient. Jax was getting ready to receive a second round of chemo three weeks later, but Charlie and Justin were informed it was best to look at another option. Jax needed a transplant.

On May 13, Jax was listed for a liver transplant. While he waited, he was scheduled to have part of his liver removed to get rid of the tumor. That procedure would be taking place in Omaha, at Nebraska Medicine. He also needed a surgeon to remove the spots from his lungs, and for that procedure, he was referred to a specialist at Boys Town National Research Hospital.

On May 15, Charlie and Justin brought Jax to Omaha so they could meet both surgeons. The plan was for the lung procedure to be done two or three days later, immediately followed by the liver surgery. Expecting to spend about a week in Omaha, the family needed a place to stay. Ronald McDonald House Charities in Omaha was that place.

While they were checking into the House that first night, they got a phone call informing them that the plan would be changing. A liver was available.

The next day, the family all went to Nebraska Medicine, where the Boys Town doctor first performed a procedure to remove the nodules from Jax’s lungs. Unfortunately, the procedure was taking a while, so she wasn’t able to remove all of them before getting him ready for the liver transplant. They did get enough to test and see if the spots were cancerous, in which case they could go back in at a later date to remove the rest.

From there, Jax went under for the next operation. As May 16 rolled into May 17, Jax received the life-changing gift of a new liver. As an added bonus, the lung biopsy results provided even more wonderful news: the nodules were not cancerous.

The family’s past four-plus months had been filled with shock, confusion, and uncertainty, but hearing those words brought a reprieve from the chaos. Some of their fears were assuaged, and they felt a sense of hope that had seemingly evaded them since they heard the initial diagnosis.

Still, Jax had some recovering to do in the hospital, and with so many tubes and lines hooked up to him, Charlie and Justin didn’t want to leave their son. So they would spend their days, and many of their nights, right by his side. When they needed some extra sleep, a meal, a shower, or to do laundry, they came back to the House. 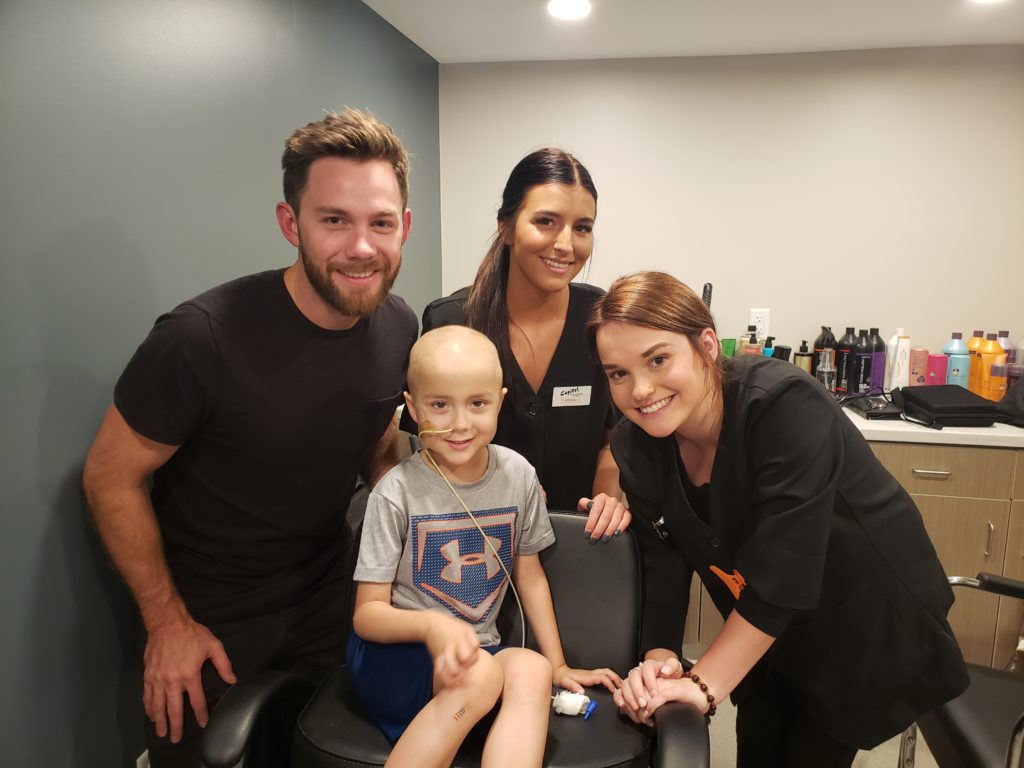 Charlie says they’ve been grateful to have a place to stay during Jax’s treatment, as its given them a chance to meet so many other families, all dealing with their own challenges, but all so willing to listen and help in whatever way possible. That was something Charlie was concerned about when leaving their support system back home. “It was definitely hard to leave that place you’re so familiar with to come to a place where you don’t know anybody,” she says. But in the House, “everyone has been really nice to us. We’ve made friends. It’s nice to have people to talk to and hang out with, and if you ever need anything, you can just ask them.”

On top of all that, staying at the House meant the family wouldn’t need to pay for a hotel, something that would be particularly costly during this time of year, with the college baseball championship taking place just a couple miles down the road. “Hotels are crazy expensive right now!”

It’s nice to have people to talk to and hang out with, and if you ever need anything, you can just ask them.

After Jax was discharged, the family has spent a few weeks in the House. Jax has been able to play with children his age. Charlie’s daughters visited them, and the whole family was able to go to the Omaha’s Henry Doorly Zoo and the Omaha Children’s Museum, with passes that were donated for use by RMHC families. They’ve enjoyed meals provided by volunteers, activities with partners like Completely KIDS, and Jax even got a haircut in the brand new salon, courtesy of Capitol School of Hairstyling & Esthetics.

With his recovery progressing, the family was able to head back home, where Jax will have scans done before completing his outpatient chemo, if needed. If the nodules on his lungs do end up requiring removal, he’ll have to come back to Omaha, and if that’s the case, Charlie knows they’ll have a comfortable, welcoming place to stay, thanks to RMHC in Omaha.

To make sure every family like Jax’s is well taken care of during the most chaotic times of their lives, make a donation here. 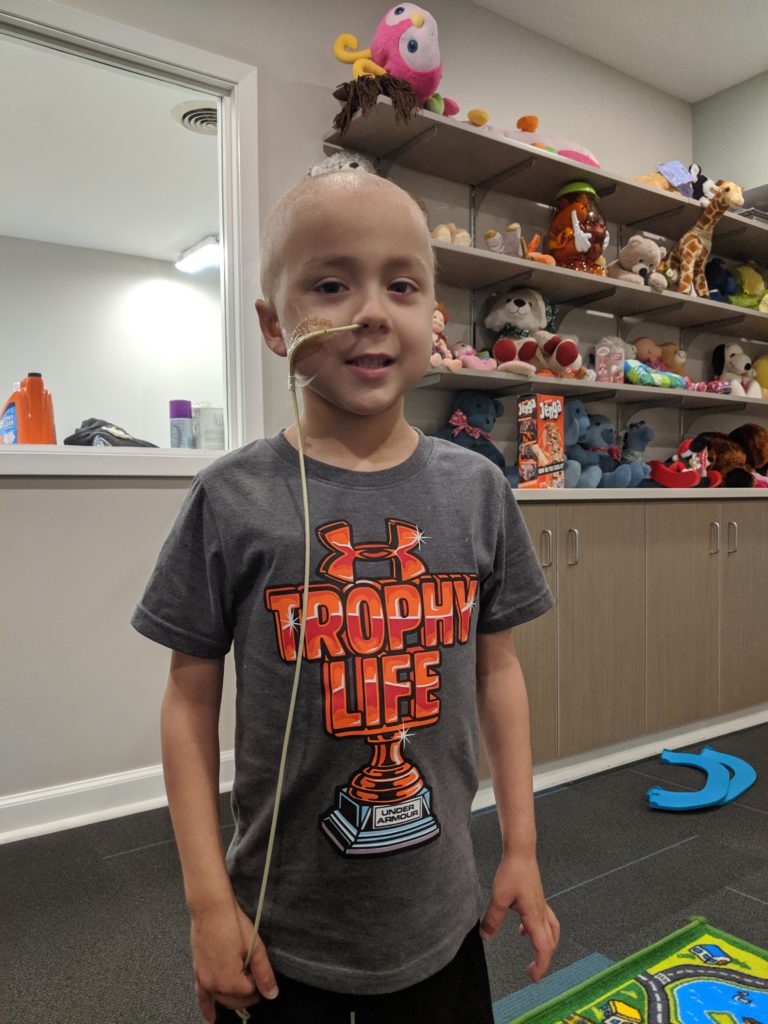