‘Being Here Changes Everything’

When Sabrina was five months pregnant, her doctor informed her that her son had gastroschisis, a condition where the baby’s intestines are outside of his belly. She and her husband Francisco were told that when the baby was born, he would need surgery almost immediately to preserve his intestines.

On the one hand, the four months of notice gave the young couple time to process the diagnosis and prepare for the surgery. On the other hand, that’s four months for a young couple to think about a medical procedure required to save their child’s life, just minutes after bringing him into the world.

It was a lot to handle for anyone, let alone a 20-year-old studying to become a dental assistant, and her husband, a diesel mechanic. But they got through it by leaning on each other, and learning as much as possible about what their son would be facing.

Juan was born near their home in Houston in November 2010, and just as the doctors said, was whisked away to surgery to correct his condition. A while later, Sabrina and Francisco were informed that the surgery had gone well, with no issues. Juan still had all of his bowel, and while he would need to spend a few days in the NICU, it seemed like he was well on his way to recovery.

Those days turned into weeks. Every day, Sabrina and Francisco would come home from work, eat dinner, and then head to the hospital to snuggle their baby boy until he fell asleep, before returning home late in the night and starting it all over again the next day. 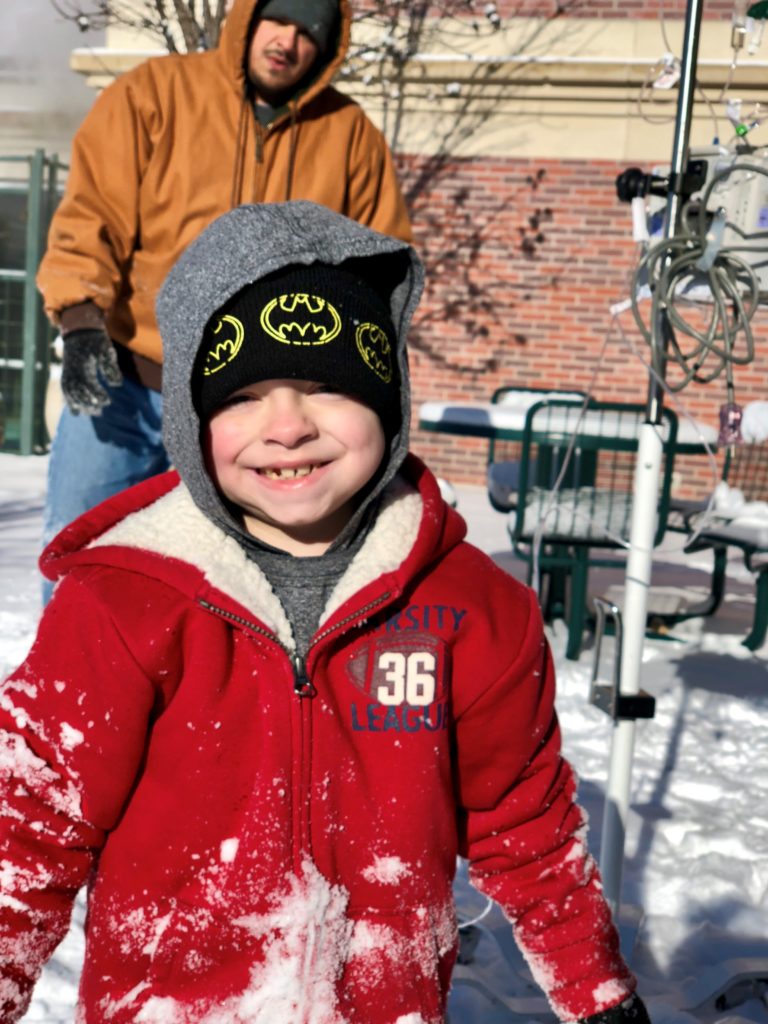 It was exhausting. And it was made all the more exhausting as Juan’s condition had yet to improve. He was on total parenteral nutrition (TPN) because his digestive system simply wasn’t working, and his eyes had jaundiced. The weeks turned into months. Eight long months, to be precise.

Juan’s parents persistently asked the hospital what more could be done. Eventually the doctors said Juan could go home, and he would be treated outpatient until more progress was made. They would work with him on feeding to get his digestive system into shape. The progress still never came. Juan could never tolerate his tube feeds, so he had to remain on TPN so his body could survive. The months turned into years.

Two years later, Sabrina and Francisco decided something had to change. They had Juan transferred to another children’s hospital in Houston for a second opinion. Of course, it wasn’t a simple transfer, as they had to change insurance plans, coordinate appointments, and have records communicated before Juan could even be seen by another doctor. After they completed all of the necessary steps, Juan was evaluated and underwent surgery. The surgery revealed that his intestines were covered in scar tissue that had knotted up, and his new doctors told Sabrina that her son had intestines like those of an 80-year-old man.

To remedy this, the doctors wanted to give Juan’s system a rest, so they gave him antibiotics and put him on TPN for a few months, at which point they would perform a resection surgery on his intestines. Finally the day of surgery came, but when the anesthesiologist was evaluating Juan, they noticed something amiss with his lungs. He had developed aspiration pneumonia. The surgery would have to wait.

Juan was taken to the ICU and placed on a ventilator. Sabrina and Francisco walked into their son’s room, and next to the bed was an enormous machine that looked like something out of a 1980s science fiction movie. It had large dials on its face, with wires and tubes coming out of it. Needless to say, the sight of it prompted concern. The nurses assured Juan’s parents that this machine would probably not be needed. It was only for a “worst-case scenario.” Their minds were put at ease, but only temporarily.

A short time later, Sabrina received a call from the hospital. That “worst-case scenario” became a reality. Juan was being placed into a medically-induced coma and hooked up to the machine. The news was disheartening to say the least, but seeing her baby boy in that state was one of the worst feelings Sabrina experienced. “I don’t think anybody should have to see their child lie there like that. He’s not awake, he doesn’t realize what’s going on.”

The machine was busy at work, making a loud, almost train-like chugging sound. There were wires and probes and tubes and sensors all around, and it was all too much to handle. “It was heartbreaking. It was devastating. I broke down when I saw him like that.”

For the next month, Juan remained in the coma while this machine kept him breathing. They were then able to ease him back onto a regular ventilator, and eventually, he was back to 100 percent. Three months following the pneumonia diagnosis, Juan was able to have his surgery.

The resection surgery took an agonizing 12 hours, and left Juan with just a few centimeters of small intestine and colon remaining. His lack of bowel now meant Juan required even more specialized care. The doctors referred his parents to Nebraska Medicine in Omaha, and Sabrina remembers zero hesitation. “We have to go.”

The family arrived in Omaha the next day, and Juan was evaluated for a transplant. During that evaluation, they stayed in the Ronald McDonald House, and while their stay wasn’t long, Sabrina says she immediately knew it was the right place to be. “This House is awesome. It’s so nice to come back [from appointments] and there’s families to talk to, and the Meals That Heal groups are great.” 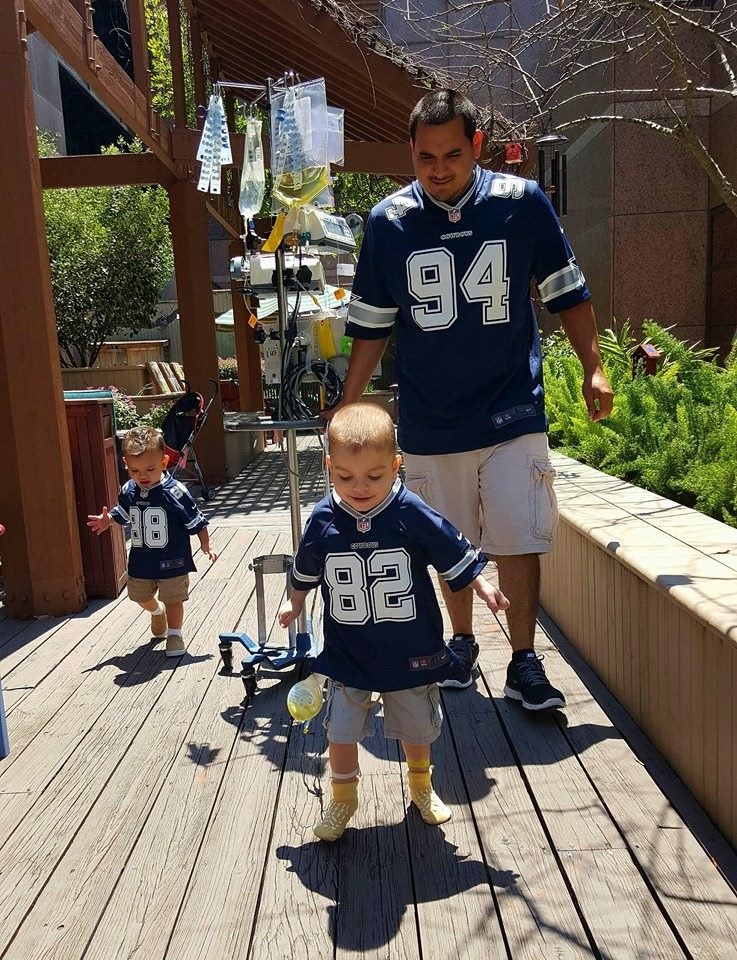 Shortly thereafter, the family had a stretch of great news. Juan had just turned 5 years old, and a week after the evaluation, his parents found out that he was being placed on the list for a transplant. He was also granted a wish from the Make-A-Wish Foundation, and the whole family (including younger brother Cameron) made a trip to Disney World. But all of that was topped just two months later when Sabrina answered a phone call from the hospital in Omaha. Juan’s organ transplant was ready. She was overwhelmed. “I think they thought I just hung up because I was so quiet!” Sabrina, Francisco, Juan, and Cameron packed some bags and left for Nebraska the next day.

While the transplant went more easily than expected, the process had been difficult for the family. Sabrina had to leave her job, and Francisco was only able to be away from work for shorter periods of time, leaving Sabrina in Omaha to take care of the boys. It was challenging for both of them. “The hardest part of all of this is being apart. We go through everything at home together.”

Luckily for Sabrina, she was surrounded by other parents who understood exactly what she was going through. “The families here really help fill that missing bond. What the House provides is not only the volunteers and the employees, it’s the other families too, all the other families that you can relate to. You can really understand where they’re coming from and they understand where you’re coming from. It’s so nice, and it’s really heartfelt.”

You need that kind of support. Even if it’s just to vent on how stressful things can be at times, it kind of eases the anxiety of things. It’s almost therapeutic. You don’t feel like you’re coming back alone and in a bubble, starting the next day over with the same thing. Being here changes everything.”

You don’t feel like you’re coming back alone and in a bubble, starting the next day over with the same thing. Being here changes everything.

One of those changes has been with Sabrina herself. She and Francisco both had to dive into the deep end when it came to learning about the medical field. After hearing the terminology, and figuring out how to administer medications and change dressings, Sabrina had the confidence to pursue a new career. She decided to go to nursing school. “If you can’t beat ‘em, join ‘em,” she says with a laugh.

All of the traveling has made a full immersion into school difficult, but Sabrina has been studying in between doctor visits, and despite so much on her plate, she has maintained a 4.0 GPA. Francisco helps her study, and the lessons she learns in class give her a greater understanding of what to expect during Juan’s appointments. And it doesn’t hurt having other parents around who have dealt with the same steep learning curve.

The House has been great for Juan and Cameron, too. Sabrina says the best days have been when Juan is outpatient, and he can run around and play with his brother and the other kids. “One day Juan pointed to another kid and said, ‘Mommy, look! He has a backpack like me!’ (referring to the backpacks containing medical supplies many children with short bowel syndrome carry). He’s not alone either. He has some friends here he can relate to.”

Sabrina especially loves the House kitchen, not just for the food provided by volunteers, but for the opportunity to meet with the other families and catch up on their days. It’s a place where families truly come together. She recalls a particularly fun day around Memorial Day last year. The families all decided to make a big potluck dinner for everyone, so all the parents were making their dishes in the kitchen, enjoying each other’s company and getting a break from the stress of everything going on. They got some water guns and water balloons for the kids, who had an absolute blast playing in the back yard. It was a day Sabrina says she’ll never forget.

Shortly after that Memorial Day, Juan had another significant procedure: he had all of his external lines and ports removed, and his ostomy bag was taken down, giving him more freedom than he had ever experienced. He could climb a jungle gym without worrying about a line getting tangled. He could go swimming. He could play t-ball. In short, he could be a kid.

Juan is now nearly two years post-transplant, and he continues to do well. He still has to come to Omaha every few months for a check-up, and even if those appointments only take a day or two, Sabrina knows they have a home away from home waiting for them, full of friendly faces.

“It’s like you have another family up here, all going through this together. We all try to help each other out. I am thankful for everything this House provides. It’s made this journey a lot easier than it could’ve been.”

Our families support each other so they can face their difficulties together. You can provide even more support by donating today. 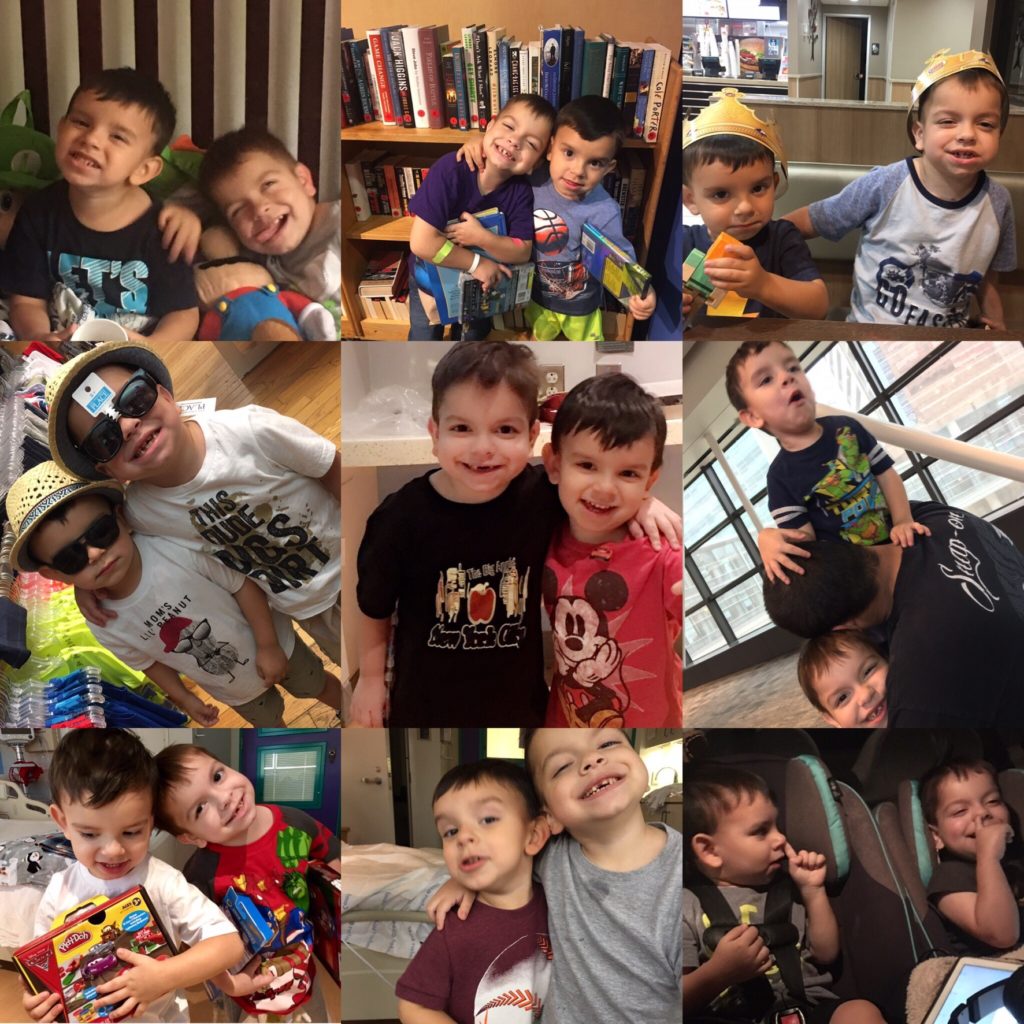