Beating the Odds with Grace

April and Jeff Albright have almost always maintained a positive attitude. That same attitude will be needed as they approach a new chapter in their life – parenting two teenagers at the same time.

When their youngest, Grace, is asked if she’s excited about joining older sister, Alyssa, in teenhood in a few months, she allows a coy smile to cross her face as she shrugs her shoulders without saying a word.

When her mom was pregnant, Grace was given a life expectancy of two months. She had a six percent chance of reaching the age of one.

Says April, “We didn’t expect to be here.”

When April was 26 weeks pregnant, she went in for a routine ultrasound. As she and her husband looked at the screen, they saw something odd. There was a large, black blob in the middle of the baby’s stomach. April asked the doctor what it was, to which the doctor replied, “I don’t know.”

April and Jeff obviously wanted answers, and to find them, they first had to drive 160 miles from their home in Wyoming, to Billings, Montana, where a specialist confirmed that the blob was the baby’s bladder. He then explored the potential causes. While a blocked urethra could have explained it, the doctor felt that wasn’t the issue. He had a hunch that the baby had megacystis-microcolon-intestinal hypoperistalsis syndrome (MMIHS). April’s reaction was the same as yours: “Mega- what?”

The doctor explained that MMIHS is a very rare genetic disorder that affects the stomach, intestines, and bladder. He handed the confused parents the only information he had available, and while seeing the diagnosis in writing answered one question, the pamphlet hardly put April and Jeff at ease.

“It was all gloom and doom.” 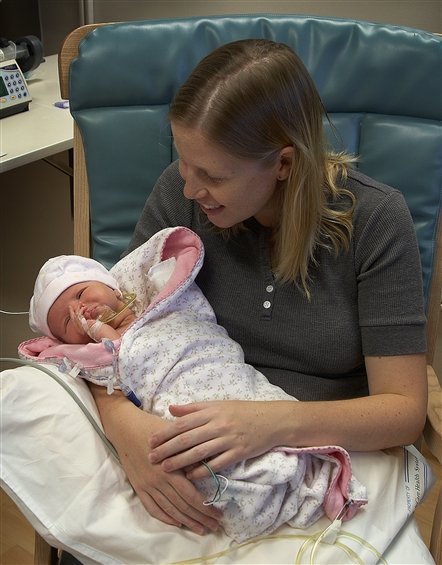 April and Jeff, however, found the determination to take this news in stride. They wouldn’t let a diagnosis take away the gift of a second child, regardless of how long she might be here. April remembers thinking, “If we’re going to have her for two months, we’re going to give her the best life we can for those two months.”

They hit the ground running, seeking any and all information they could find on this disease. They started searching for places that could treat Grace, beginning with her birth. Doctors told the couple they would need a more comprehensive NICU, and they found one in Tacoma, Washington, where they also had family living.

A couple of months later, Grace was born, weighing eight pounds, nine ounces. Due to her condition limiting her body’s ability to expel waste in the womb, Grace’s stomach was far larger than her head. After inserting a catheter to drain her bladder, Grace was a full pound lighter. For the next 52 days, she stayed in the NICU, where doctors tried various strategies to ensure she received the necessary nutrition. They tried feeding her orally. They tried using a gastrostomy tube. Those simply didn’t work. The only solution involved Grace getting total parenteral nutrition (TPN) intravenously. “TPN was life,” recalls April.

She and Jeff would visit Grace in the NICU every single day, shuttling back and forth between home, Alyssa’s daycare, and April’s parents’ house. It was a lot to handle, but they leaned on each other and were steadfast in doing everything possible to care for their baby.

A few months after bringing Grace home, April and Jeff moved their family back to Wyoming, and found a hospital capable of treating Grace on the West Coast. It was likely she would need a multi-organ transplant sometime in the future, so every three months, they would travel to Palo Alto, California. This continued for several years, including a few instances of Grace actually being listed for transplant.

One such instance occurred when Grace was three, at which point April and Jeff felt it was necessary to explore the option of taking her on a Make-A-Wish trip of her choosing. Despite not being able to eat any food orally whatsoever, Grace absolutely loves cooking. She always has. Want proof? When she was deciding where to go for her Make-A-Wish trip around the age of four or five, Grace was struggling to choose between meeting Rapunzel and meeting Bobby Flay of Food Network fame.

(She did eventually choose Rapunzel, and the trip to Disneyland was just as magical as you can imagine, complete with Grace and Alyssa both being treated like princesses, crowns and all.) 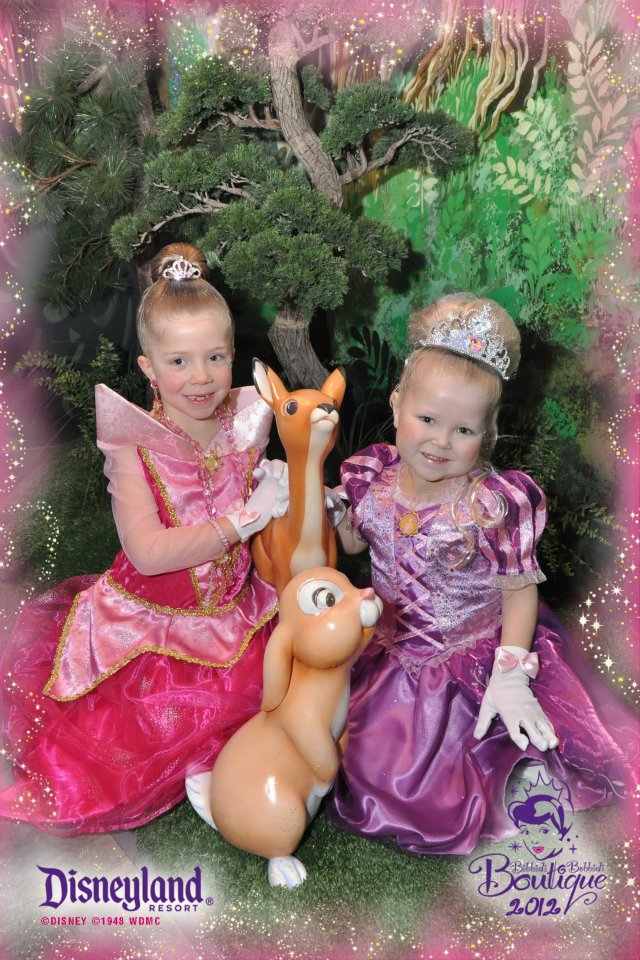 Several years later, a few medical issues started to pop up for Grace, and in 2018, her doctors in California suggested her family seek a second opinion from a doctor half-way across the country. They recommended Dr. David Mercer, at Nebraska Medicine in Omaha.

Grace’s parents felt that a second opinion wouldn’t hurt anything, and after thoroughly researching Dr. Mercer and his intestinal rehabilitation program, the family of four hopped in their car and embarked on a 730-mile trek to the southeast. When they arrived at the hospital and met with Dr. Mercer, they were struck by a couple of things. First, the socks, of course. Second, Dr. Mercer didn’t solely speak to April and Jeff about their youngest daughter. He talked directly to Grace, asked her what she wanted, and what her goals were. April says, “I loved that she was a person to him. She wasn’t just our child. This was her appointment.”

The family’s stay in Omaha was not simply a one-day excursion, however. They needed a place to stay while Grace underwent the evaluation, and despite construction being well underway on the Hope and Healing Expansion, Ronald McDonald House Charities in Omaha was that place.

Almost immediately upon walking in the door, April felt comfortable. She was greeted by Director of Family Services Vicky Sheeler, who showed the family to their room, as well as all the things that were to come in the expanded House. Beyond that, Vicky did something that was, and is, appreciated as much as anything else: she showed the family that she truly cared about their well-being.

April says, “Vicky’s like the House mom. She was so sweet, and so kind, and just welcoming. She always remembers you, and when you walk in, she gives you a hug.” April also appreciates that she can call Vicky and doesn’t have to stumble through an awkward conversation, re-explaining who she is, what Grace’s condition is, and the like. When she calls, Vicky (as well as Program Coordinator Mackenzie Leahy) knows exactly who is calling, and after a quick greeting, immediately asks how Grace is doing. As April explains, “She’s there with you in the journey.”

Of course, staff members aren’t the only supportive ones in the House. Being surrounded by other families in similar circumstances has provided April with tools for coping with different situations, answers to difficult questions, and above all, friendship. Many conversations revolve around the children and news from the doctor, but April says, “We all realize when we need a break,” and one night some parents stood in the kitchen, chatting, and enjoying cookies until after 10:00pm. Another night, several moms sat around and talked about how they met their husbands. “We’ll get back around to talking about [the kids], but we can ask questions about anything. You get comfortable and familiar with people. We went to the movies with a couple families, then we went to the zoo with them.”

Grace then chimes in with a reminder that they need to visit another child currently in the hospital later in the day.

A twelve-year-old who has spent more time in a hospital than anyone should have to, and she wants to go back to the hospital to bring joy to another sick kid, one whom she just met a week ago.

“Fast friends around here,” says April with a chuckle.

Grace and April both appreciate that Grace has kids with whom she can interact, who understand when it’s time to take medications or if they need a rest. And other times, they can dance around a family room, build things with Play-doh, or play Fortnite.

“They can be normal kids.”

(Side note: Grace wasn’t a fan of Fortnite until she came to Omaha. Now her goal is to get good enough to beat the boys in the House.) 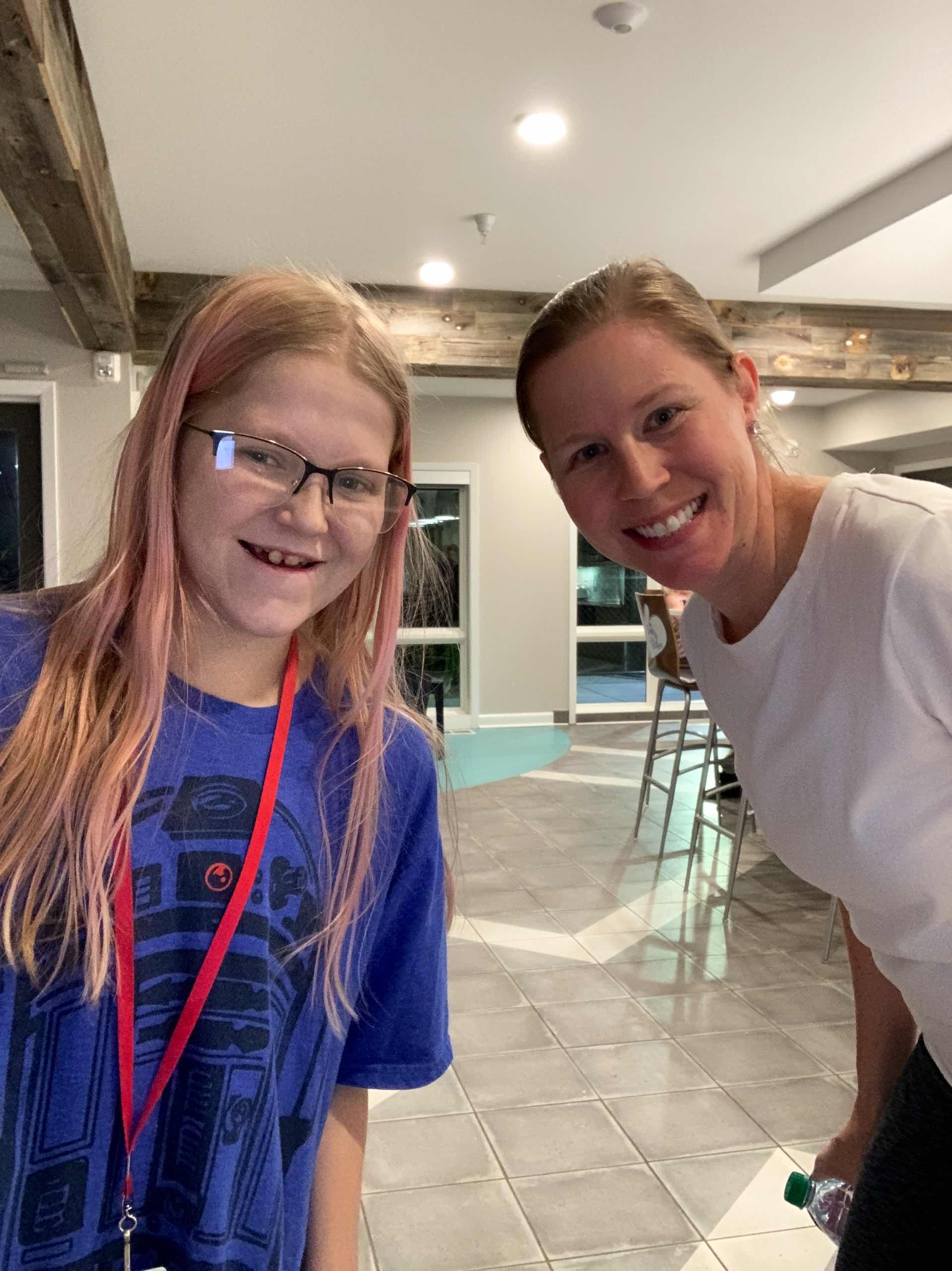 The initial evaluation ended with Grace’s care team deciding intestinal rehabilitation was the best plan moving forward, so they could stave off riskier transplant procedures for as long as possible. As Grace has ventured back to Omaha a few times in the last two years to continue her intestinal rehab, their family has continued to stay at the House, taking full advantage of the more tangible offerings found under our roof.

They’ve participated in programming from Completely KIDS. They’ve used the complimentary passes to Omaha’s Henry Doorly Zoo and the Omaha Children’s Museum (two of Grace’s favorites). They’ve relaxed in the extra space of the expansion, including the contemplation room and the kitchen. Grace’s love of cooking, combined with the spacious kitchen and stocked pantry, has given her a chance to prepare plenty of food, even though she can’t eat a bite of it.

She does contend, however, that she can make better-tasting eggs than her mother.

April agrees, and enjoys that her daughter can explore her culinary talents in this environment, saying “It’s so fun that she can make food for me sometimes.”

For those times neither April nor Grace cook, of course, there is almost always a meal prepared by volunteers, which is something April truly cherishes. “I don’t know if those dinner group volunteers really know how wonderful it is to know I don’t have to cook a dinner for one.”

Some trips to Omaha are made only by Grace and April, since Jeff and Alyssa must remain in Wyoming for work and school. For those days or weeks they’re apart, April says it’s so helpful to be around others who not just empathize, but actually understand what they’re facing without needing to hear a half-hour-long explanation of MMIHS and TPN and intestinal rehabilitation. It’s not like a past experience at an airport, when a TSA official told April that Grace would need to remove her backpack, and as it contained medicines connected to Grace’s body via tubes, April had to respond with, “Okay, she can take it off, but it’s not going anywhere.”

She doesn’t get asked those exhausting questions over and over again, because as April explains, “It’s not a big deal. It’s everyday life, and people in the House get it.”

Whether it’s the volunteers, the staff, or the other families there for support, April comes back to one realization:

“You’re not alone, and people care.”

Grace is quick to add, “And there’s kids to play with.”

After making her comment, Grace turns her attention back to the game on her phone. 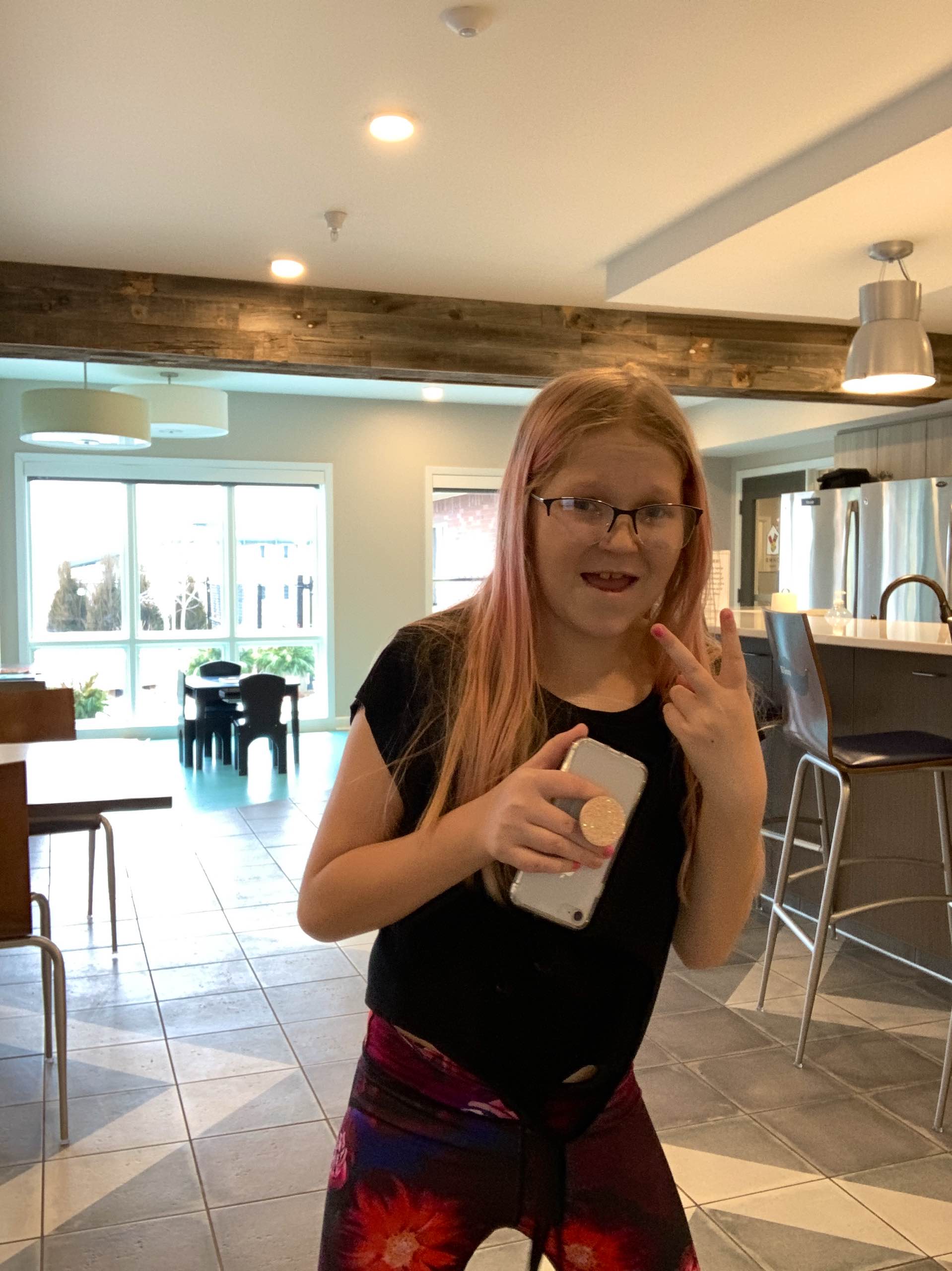 To support families like Grace’s, make a donation today.