‘I couldn’t have done it without them’

As guests enter Ronald McDonald House Charities in Omaha, one of the first things they’ll see is the toy room – a glass-encased space with a Werner Enterprises truck on the back wall and Ronald McDonald at the wheel. From floor to ceiling, the room has shelves chock-full of brand-new, donated toys for kids of any age and interest. Children are free to grab a toy when they check in to the House, and on their birthday, and any other special occasion. The room provides kids with an object that will brighten their day and allow them to face their current circumstances. A present for their present.

For Kenzie Pasold, the toy room serves another purpose. Her six-month-old son, Harrison, isn’t yet able to play with many of the toys, so for Kenzie, this room, and these toys, are symbols of something to look forward to. A gift for a future she hopes to soon have.

Roughly halfway through Kenzie’s pregnancy, she and her husband, Garret, went to a check-up at her doctor’s office in their hometown of Norfolk, Nebraska. During that appointment, doctors noticed a problem. They diagnosed the baby with intrauterine growth restriction, or IUGR, which essentially meant the baby was not growing like he was supposed to. Doctors told her that the baby also had echogenic focus and craniosynostosis, a condition where the bones of a baby’s skull form together too early.

As a first-time expectant mother, the news was a lot to bear. Kenzie says, “I walked out and broke down in tears in the parking garage.”

While the craniosynostosis diagnosis proved to be a false positive, the IUGR was still something to monitor. To do so, Kenzie would make regular visits to specialists in Omaha, traveling four hours round-trip each time. 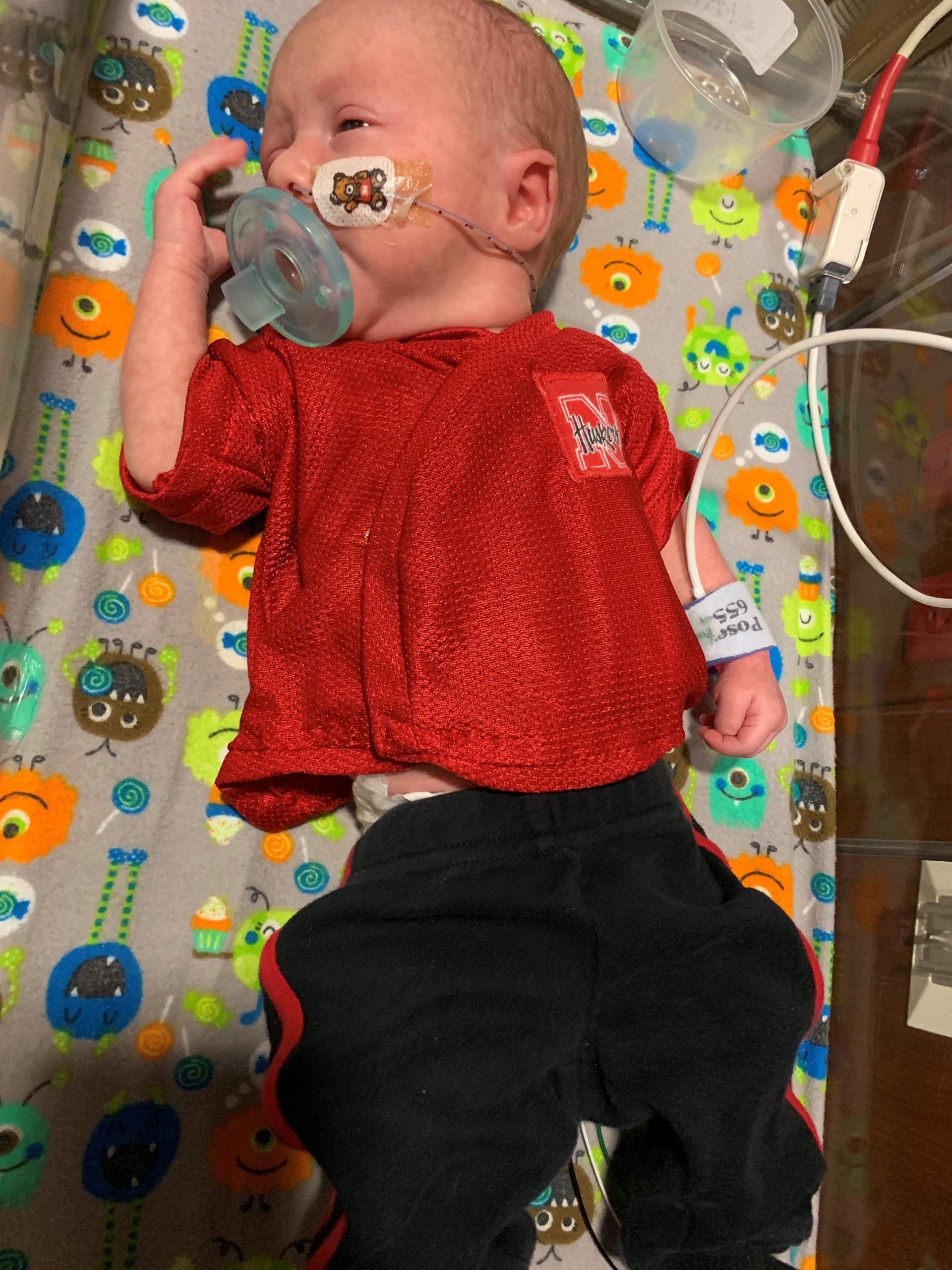 When Kenzie was roughly seven months pregnant, she and her husband had an opportunity for a road trip to watch some Husker football, as they were set to take on Purdue in West Lafayette, Indiana. The baby’s condition was stable, so Kenzie’s doctor gave her blessing, as long as they stopped regularly to get out of the car and walk.

The couple joined some friends to make the trek east, and overall they had a great time, game result excluded. (“Let’s not talk about that,” Kenzie says with a sigh.) She had an appointment scheduled in Omaha on the following Monday, so rather than drive all the way to Norfolk on Sunday only to turn around and take US-275 right back to Omaha the next morning, Kenzie took the advice from the hospital social worker and called Ronald McDonald House Charities in Omaha to get a reservation for the one night.

They checked in to the House, and at 9:00 the next morning, Kenzie went in for her appointment. During the appointment, however, she suffered a placental abruption, leading to hemorrhaging. Doctors gave her medicine, but the danger to the baby was growing. He needed to be delivered immediately.

On November 4, two months before his due date, Harrison was born weighing 4 pounds, 13 ounces. He wasn’t breathing.

Thankfully, the medical team was able to resuscitate him before placing him on oxygen, inserting an IV in his arm and a nasogastric tube in his nose to provide nutrients, and laying his jaundiced body under Bili lights (a form of phototherapy using fluorescent lights).

In the span of less than 48 hours, Kenzie and Garret went from watching the Huskers and preparing to soak in two more months as a family of two, to watching their son fight for his life.

To call the change sudden would be like calling the 1995 Huskers “a pretty good football team.”

Kenzie says she and Garret were scared, but once Harrison arrived, “it was like, ‘here goes nothing.’”

While they learned more about Harrison’s condition, they also learned their son was stronger than his body suggested. “He’s a fighter,” Kenzie says. “A stubborn little fighter.” 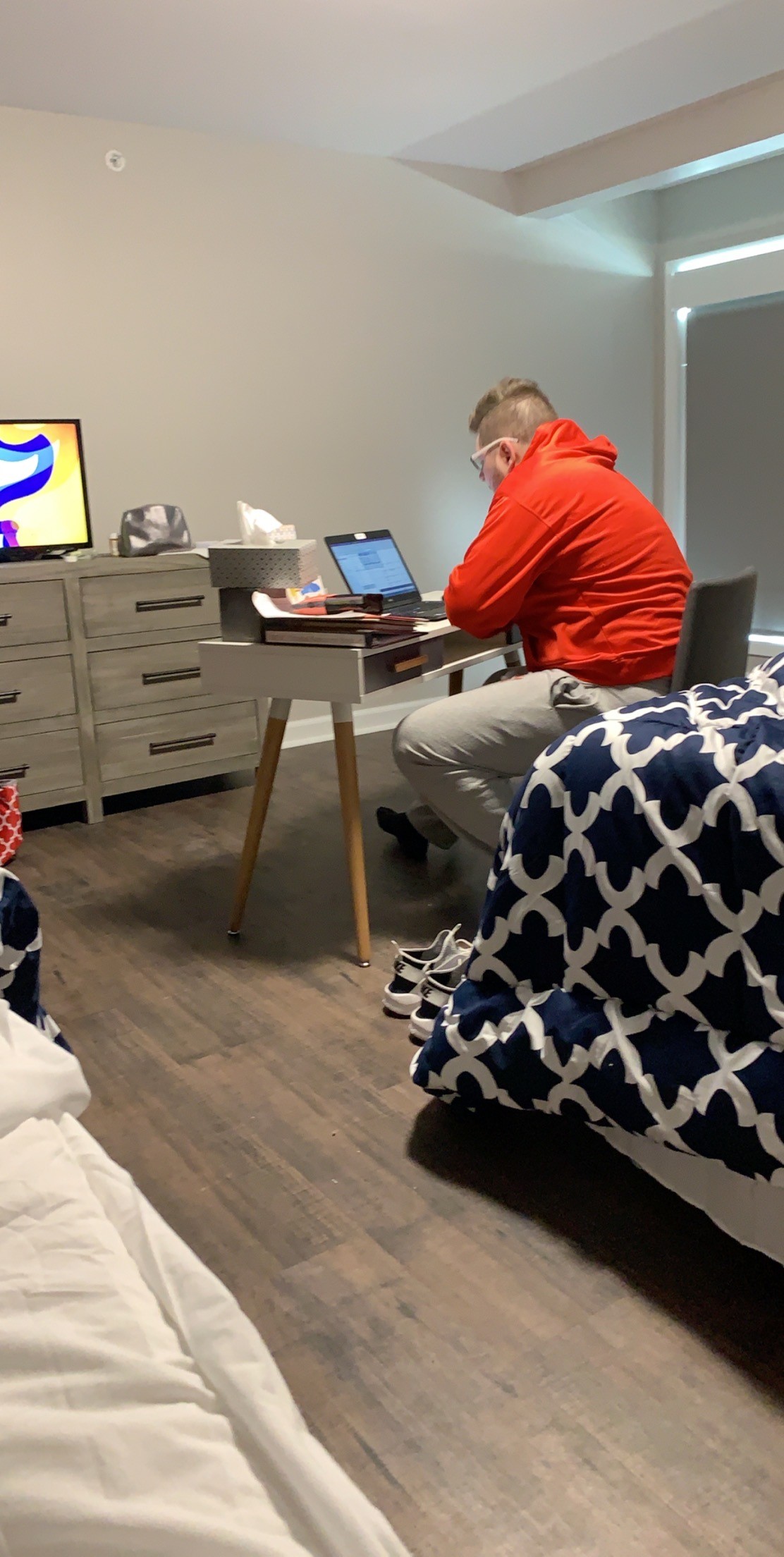 Harrison would need time to carry on that fight, and during that time, his parents needed a place to stay. When Kenzie was ready to be discharged, she and Garret went right back to their room at the House, where they could sleep, eat, shower, and in Garret’s case, work.

Both parents were expecting to accrue more vacation time at their jobs over the final two months of Kenzie’s pregnancy. Harrison’s early arrival meant not only would Kenzie be unable to work at all for the time being, but Garret wouldn’t have as much time with his wife and son during their stay in Omaha. Working remotely could extend that time slightly, but doing so in a hospital, surrounded by beeping monitors and crying babies, would be impossible. So Garret created an office nook right in their room at the House, allowing him to get work done while also seeing his son. “The fact that we had a place to stay where he could work and still care for Harrison on the weekends was so great. Otherwise I don’t know how he would’ve been able to see our son,” Kenzie adds.

Still, after about a week, Garret did need to return to work, leaving Kenzie alone. She says, “I bawled for three days, like, ‘How am I supposed to do this?’”

Of course, Kenzie wasn’t really alone. The other families let her know she was going to be okay by wrapping their arms around her, figuratively and literally: “They just hugged me.”

She would sit in Vicky’s office and cry while other staff members or parents consoled her. The comfort was invaluable, as was having someone with whom Kenzie could share her story. “It’s nice to talk to people,” says Kenzie. She was able to talk about Harrison’s battles without having to explain all the medical terminology she was only beginning to grasp herself. “They just understand. You live the hospital life and they’re there for you.”

Kenzie grew particularly close with Rae and Andrea, two fellow Nebraskans each facing challenges different from Kenzie’s, but their specific stories didn’t matter. What was important was that they were all in those stories together.

When asked to describe their relationship, Kenzie doesn’t hesitate: “That’s my family. 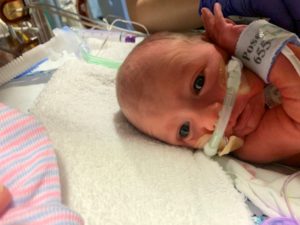 The bonds between them are so strong that a good day for one parent makes for a good day for the others, and a bad day for one doesn’t feel quite so bad. She recalls a specific instance, after Harrison wasn’t able to pass a test in his development journey. “Harrison didn’t pass his test, but Hayden [Andrea’s son] got over a sickness he was battling. So there was sad news, but it’s also happy news for our family.”

In addition to the emotional burden being lightened, the financial burden felt much lighter thanks to RMHC. Had Harrison been born on his due date, the couple would have gotten two more months’ worth of savings that could have helped with some of their bills. As it stood, they faced a mountain of medical debt, while still paying bills on their home in Norfolk.

By staying at the House, Kenzie was able to grab food from the pantry at any time. During later visits to Omaha, when she needed diapers for Harrison, there were plenty available in a storage room. And she enjoyed meals prepared by volunteers every night, which reminded her of a trip she made to another Ronald McDonald House when she was in high school near Wichita, Kansas.

Her National Honor Society prepared a meal for the families at the Wichita chapter – a taco salad, to be precise. She remembers feeling happy about volunteering, but thinking it couldn’t be that big of a deal. “I mean, it’s just a taco salad, you know?”

Then, during her stay, a local sorority came to the House and cooked pancakes and bacon. She recalls with a laugh, “I don’t think they have any idea how happy I was to have pancakes and bacon.” Because of their bills, Kenzie says, “we couldn’t afford bacon.

“That’s the harsh reality of your kids being in the hospital: you can’t work. If you don’t work, you have no money. You have no place to stay. You have no food. Without the Ronald McDonald House, I literally don’t know what I would have done.”

That’s the harsh reality of your kids being in the hospital: you can’t work. If you don’t work, you have no money. You have no place to stay. You have no food. Without the Ronald McDonald House, I literally don’t know what I would have done.

The support didn’t stop with a room, people to talk to, and meals. Kenzie also participated in arts and crafts activities led by Completely KIDS. She learned to knit and made a hat for Harrison. She made Christmas cards as the holiday approached, thanks to a generous donor. And on one occasion, she got her hair done in the new House salon.

She says that might have been her favorite day there, “because it felt like a normal day.

“You know a normal day, I would go and get my hair and nails done. That’s what you do in a normal life, so I had a hair appointment. Even though I had a crazy day at the hospital, I had a normalcy, because at 5:30 I got to get my hair done. After all those days in the hospital, always listening to beeping non-stop, then you come home, shower, go to bed, and it’s the same thing every day. A haircut? Let me tell you: that was amazing.”

All of these things helped Kenzie deal with the new reality her family faced. Harrison continued to progress and after 37 days, he was discharged and they got to go home. 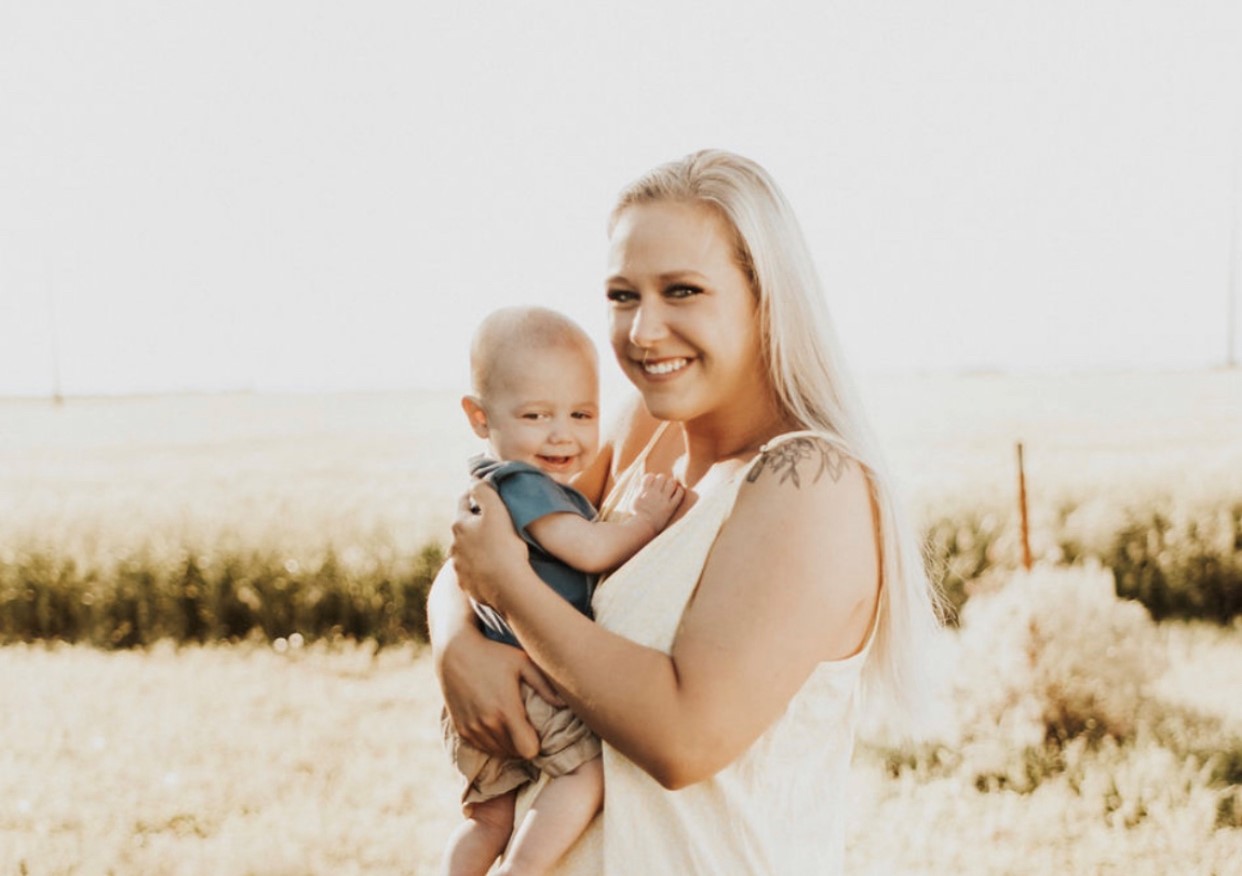 Leaving the House was exciting, but Kenzie also says it was pretty hard. “My family that had my back for 37 days, I didn’t have them to go to anymore.” To make up for that, Kenzie has stayed in contact with that family through social media, where everyone continues to celebrate good days and comfort each other on the bad ones. Despite being apart, they’re still on their journeys together.

Currently, Harrison is going through occupational and speech therapies in Omaha (though the COVID-19 pandemic has prevented his family from staying at the House during those visits) and doctors are optimistic he’ll be at an age-appropriate development level shortly after his second birthday. Hitting that milestone is something Kenzie has been dreaming of for months.

She thinks back to the times she would enter that glass-encased toy room just beyond the House foyer. As she scans the shelves of stuffed animals, action figures, and remote-controlled cars, her eyes lock on a Little Tikes-brand basketball goal. She imagines Harrison as a toddler, dunking a ball through that hoop. She sees him smiling and laughing as he reaches for that goal, knowing it marks the accomplishment of another. She longs for that future when they can come to Omaha to see family, not doctors.

“I’m just waiting for the day we can go back and we don’t have to stay there. We can just visit and say, ‘Look, we did it.’” 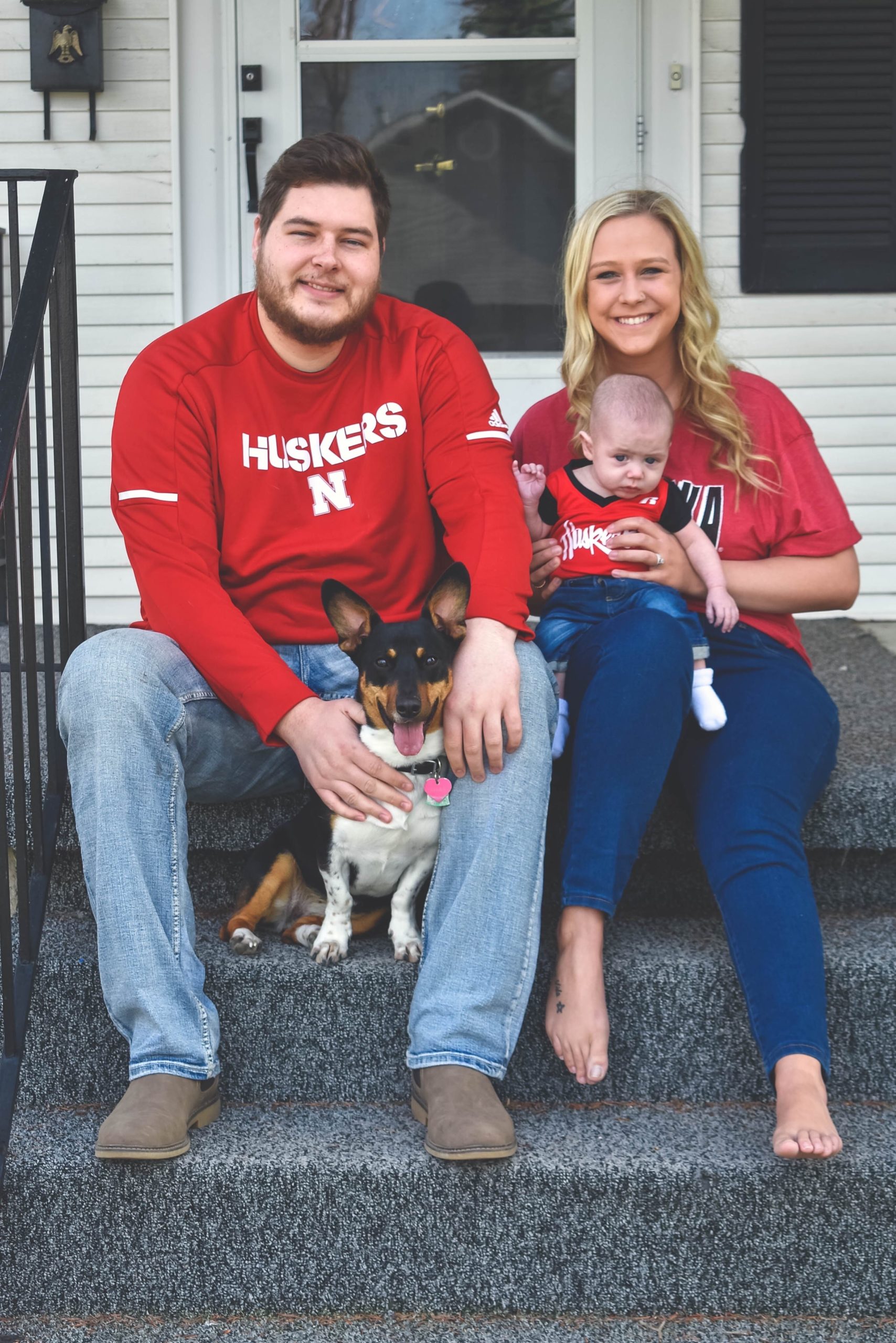